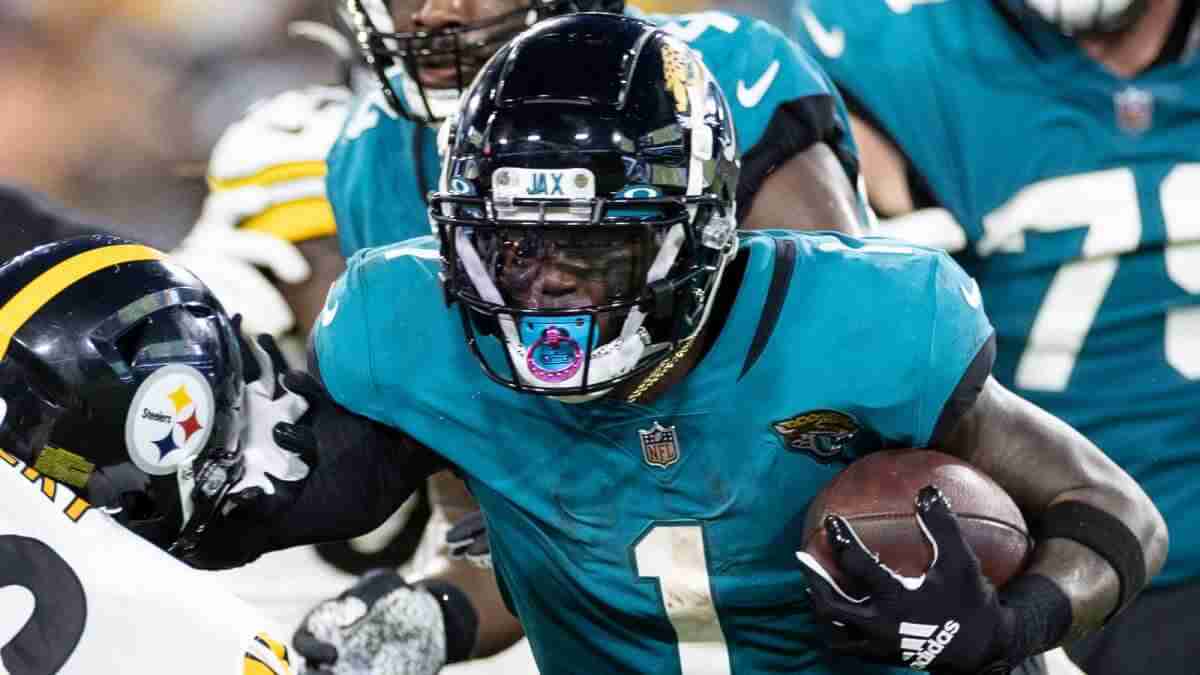 We are here to cover the 2022 DraftKings showdown slate for Thursday Night Football Week 16, Jacksonville @New York. If you’d told me at the start of the season I’d be excited to see this game, I would’ve called you a liar. But, the Jaguars have really turned things around on offense recently and the Jets just seem to be pulling together as a team. The O/U has been set at 37 points, with the Jets a 2-point favorite.

Etienne is the heartbeat of this offense, especially the backfield. Week to week the volume for him is there, but the production can be very up and down. The Jaguars are going to need to be able to rely on Etienne in this game if they are going to get a good result here. Etienne looked great last week against a tough Dallas unit, and should be able to have another good outing here.

The Jets offense isn’t really built to air it out, but Wilson has been able to thrive with the opportunities that he has been given. In the last four games, he has been targetted 39 times (15 of those against the Vikings). With that target share, he has a decent floor and as we has seen this season his ceiling is maybe the highest on the slate.

Jones is having a good season- pretty much the best one of his career (if he scores 3 more TDs then he has beaten all of his career highs). Could be a popular CPT option after his blow-up game against Dallas, where he had 109 yards and 3 TDs! His target share has been there too, with a total of 51 targets in his last five games. Has more upside than Christian Kirk as the ‘secondary’ receiver in the offense.

Knight has really stepped up in the absence of Breece Hall. Knight is only getting around half of the snaps in the offense, but he is constantly getting the ball when he is on the field. Ideally, he would get more targets in the offense, but his volume in the offense can’t be overlooked. After struggling against Detroit, should be a nice pivot CPT play on the slate. With the price too, frees up salary to use elsewhere.

Lawrence has really been putting together some great performances this season (both in real life and fantasy). After some matchups against some weak defenses, I was unsure about how much of it was Lawrence and how much was the opposition. After he threw for 318 yards, 4 TDs and a single INT against the Dallas Cowboys I’m saying it’s Lawrence. The Jets defense is another tough matchup, so I’m not going crazy here, but I’ll have a decent share of Lawrence in my lineups.

For all of the recent success of Lawrence, Kirk hasn’t really hit the same highs. This could be defenses defending him more effectively, but equally, we have seen Zay Jones and Evan Engram’s roles in the offense grow. This could be a big game for Kirk, but I would rather shoot for the upside of Jones here and save on salary (over a $3k saving).

It’s a crazy world where we have a starting QB (that wasn’t a last-minute replacement) available for less than $10k. The leash on Wilson feels short, and it’s tough to know which version you’ll get. Wilson has thrown for under 200 yards in four times in the 8 games that he has played this season. But looked alot more effective last week against the Lions. The price is tempting, but I’m not going to have a massive share of him with the volatility of his performances.

Engram was a player that I was in on during the offseason as a low-level streaming option, and he started out that way at the start of the season. But, as Lawrence’s performances have improved, so have Engram’s (on the whole). The Jets defense is an effective unit but has struggled to defend the TE position at times. A nice option with upside in the offense.

Carter is getting on the field a decent amount, roughly the same as Knight. The difference is that Carter just isn’t getting the ball when he is on the field. In his last three games, he has totalled 15 carries and 9 targets! Has a path to success, but would mean either an injury to Knight or a random TD being scored. At the price, I’ll take my shots elsewhere.

Davis looks like he is going to be able to suit up in this one. Has been working as the secondary receiver in the offense behind Wilson when he has been on the field. Had some strong performances, but mainly has been a floor play with low double-digit scores on the season. I’d prefer a shot on Elijah Moore, who is cheaper.

Jones can’t ever be fully discounted, as he does have it in him to have a big performance through the air. But, we’ve not seen him do it for the Jaguars this season, as the performances of Kirk, Zay Jones, and Engram have pushed him into a marginal role. Unless you are entering a number of lineups, I’d look elsewhere.

Moore was cast out, but looks like he is getting more involved in the offense now. 23 targets in the last three games point to inclusion in the offense. The issue is that the production hasn’t really followed. In those three games he has totalled 12 catches for 118 yards. Not great, but its certainly viable at the price tag.

Conklin’s price tag feels cheap, but then I looked back at his game logs and he hasn’t done too much for fantasy since he blew up in Week 8. Has been getting targets, with 73 on the season (beaten only by Wilson), but really not doing too much with them overall. Not sure I’ll have too much of him in my lineups, but worth a shot in a build with more higher-priced options.

I’ll give a quick mention to C.J. Uzomah ($3,000) who feels really overpriced here. Had a blow-up game last week, with 41 yards and 2 scores. But that’s a massive amount of his fantasy production on the season. I’d rather opt for Conklin.

Agnew is worth a shot in GPPs. Not getting much in terms of targets, but he has shown that he can have a blow-up game on minimal targets. Don’t go crazy, but I’d prefer a shot on Agnew over Marvin Jones.

My interest in Berrios is going to be dependent on who the Jets have active for the game. If the team leaves Denzel Mims and Jeff Smith on the sidelines then I’m interested. If they are, then I’m not. Berrios has been filling that depth piece for the team, so if he needs to split it there’s not much here to rely on at all. I’m also a fan of his kick and punt return duties, as that can always mean a random TD.

The kickers are massively in play for me on the slate, with the game expected to be a low-scoring game. When you then consider that the offenses can both stall here, we could see plenty of FG attempts here. Greg Zuerlein ($4,600) has missed 5 FGs, but they have all been from long-range. With a long on the season of 60 yards, I’ll happily take the shot on him. Equally, Riley Patterson ($4,000) has missed a few kicks, but more worryingly some have been closer in. I’ll still have exposure to both, but I like the home-field advantage for Zuerlein, especially with the struggles of Zach Wilson at QB. **EDIT: The weather looks like it is going to be a tough one for kickers, with high winds. I’m moving the kickers down the list of my player pool as a result**

The defenses are equally in play too, with the points total. I’ll have exposure to both in my lineups, with the Jaguars DST ($3,800) showing their ability to get to the QB along with Wilson struggling with sacks and turnovers this season. I much prefer the talent of Jets DST ($3,600) though. Yes, the Jaguars offense has been good, but this defense is a real unit and could force Lawrence to make some poor decisions.

So, there are our DraftKings selections for the 2022 Showdown of Jacksonville @New York! Remember any DFS questions, you can check out our articles here. Or you can find us on Twitter, Facebook, or Instagram.