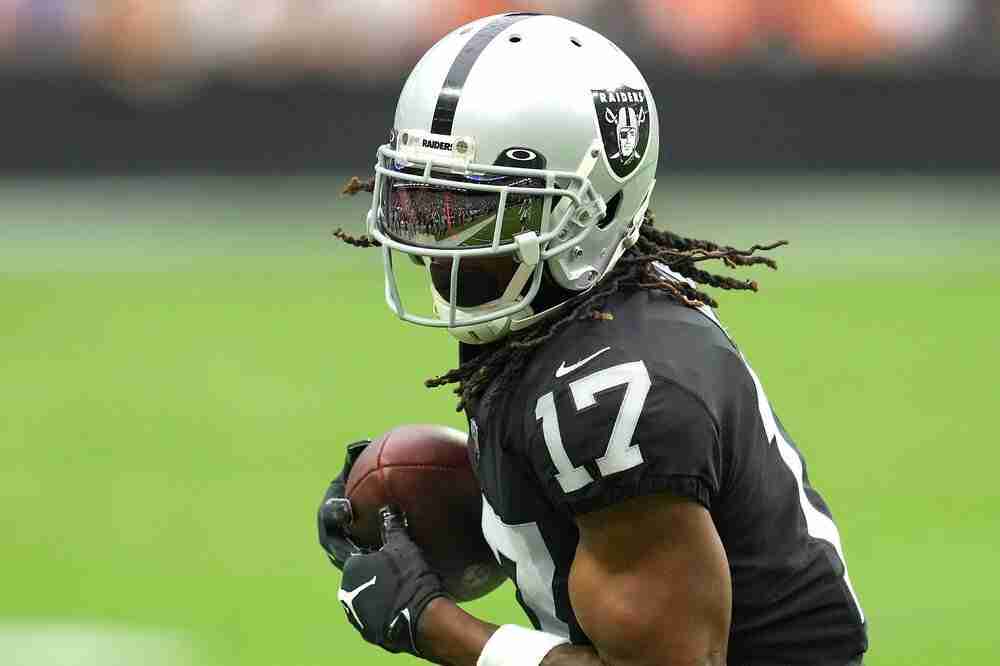 We are here to cover the 2022 DraftKings showdown slate for Thursday Night Football Week 14, Las Vegas @Los Angeles. The O/U is around 45, with the Raiders a TD favorite. This game feels quite one-sided. The Rams on offense have the choice between a QB on his third team this season, or a player that has been a low-level backup his whole career. Whoever gets the start is going to be throwing the ball to players that weren’t expected to see much of the field, and they are missing their star defensive man……….Then the Raiders have a ground game that has been effective and Davante Adams who is smashing secondaries. Key to this slate will be trying to find the Rams receiver that gets targets and hope production follows, or a random TD.

Adams is QB-proof. He was obviously elite with Aaron Rodgers, but performed when Rodgers was out, and now he is really doing the work for Derek Carr through the air. Adams has been great all season with a healthy target share. He is averaging just under 100 yards per game, and a TD. The Rams secondary haven’t been great this season and just got torched by the Seahawks. Going to be a chalky CPT selection for good reason.

If you don’t want to go Adams, then Jacobs is a decent pivot. He is getting VOLUME in the offense, with his last 3 games rushing for over 100 yards (had 229 yards in Week 12, but you knew that already). The thing that has been helping him for fantasy is that he has started getting more involved in the passing game too (averaging 5 targets over his last 4 games). The Rams are a tough defense against RBs, but they are going to need to deal with Aaron Donald’s absence.

Akers is back? Well after being shut out during the middle of the season, he seems to have been returned into the fold, so much so that the team chose to move Darrell Henderson on. Akers is the hot hand in the offense, scoring 2 TDs last week. The Raiders defense has struggled to stop production on the ground, and the Rams are going to need to avoid putting this game on the shoulders of their QB. Akers is a risky pick, as the team could just pivot to Kyren Williams in this one, but he is worth considering.

I was in on Carr during draft season, and even though he hasn’t met my expectations on the season, he has started to put up decent numbers. With the performances of Davante Adams in the air recently he has fantastic upside against this Rams secondary. In the last 3 weeks, they’ve given up over 300 yards through the air twice.

Wolford isn’t really worth too much consideration outside of if you are going with alot of lineups. I mean, he might not even be the starter, with some chatter about Mayfield being involved quickly. In the six games he has played in the NFL, he has totaled 626 yards and a single TD. Sure, some of those were when he stepped in for an injured player, but the writing is on the wall with this one.

Hollins has stepped up as the secondary receiver for the Raiders, with Hunter Renfrow on the sidelines. In the past four weeks, since Renfrow was put on IR, he has had a total of 29 targets in the offense. The Rams secondary is going to need to try and stop Adams through the air too, which should allow Hollins some extra space on the field. A nice mid-range option.

Darren Waller is nearing a return, but the last report I saw still says that it is a week away. That puts Moreau in as the starting TE for this week. He hasn’t been fantastic for fantasy, but he has had some decent (TD-dependent) games in the past few weeks. The Rams defense has been great ok at defending the position this season, giving up an average of 11.7 DKPts to the position. I’d prefer Higbee in this one of the two TE options.

Jefferson started the season on IR, and clear third option when he returned. He now is the lead receiver for the Rams. He is a really nice upside selection at the price. The Raiders secondary have struggled all season, and Jefferson has big-play ability. The question mark for Jefferson will be if his QB can get him the ball effectively.

Higbee is my favorite flex option on the slate. It’s a weird slate, with the Rams having so many injuries, which opens up him as a reliable receiving option. Higbee has a total of 78 targets in the offense, which is the highest by a long way of players that are available in this one. Surprisingly, he is yet to score a TD this season, but has a good shot of getting one here against a Raiders defense that has given up 6 so far this season (tied for 5th in the league)

This Rams backfield is a mess. Akers started, then disappeared, but now seems to be the starter again with his recent performances. But, Williams I think will get some touches in this offense as they prepare to switch to him next season. Has pass-catching ability too, which can help him with his floor if he struggles on the ground. GPP play as a pivot from Akers.

The battle of the secondary receivers on a stalling offense with QB issues. Yep, that’s where this Rams offense currently is. Skowronek has shown his ability to step up and be productive in the past, and has some nice PPR appeal on the slate. Should be on the field a decent amount too.

Atwell is the riskier selection of the two, but he has had some nice performances on the few touches he has had. There is almost no floor here with the QB and general offensive struggles, but he is a livewire and Sean McVay has said he needs to get him more involved in the offense.

The backup RBs for the Raiders aren’t really getting too many touches of the ball, so can’t really be relied upon to do anything. Injuries happen, as do out-of-the-blue TDs, but the Raiders seem happy to sit back and let Jacobs carry the load. Abdullah is at least being involved on third downs, and getting targets in the offense. But I’m not really interested in either, I’d prefer to take a punt on a minimum salary option who offers a similar upside, and lack of floor.

With the Rams struggling with injuries on offense, Powell is worth some consideration. Powell has been getting on the field for around 40% of the snaps over the last 3 weeks, and had four targets last week, catching all of them for 39 yards. As with most of the Rams, a GPP selection only.

The amount of injuries the Rams have had opens up some bottom-of-the-barrel selections. Don’t hold your breath that any of these are going to do too much of note, but they are going to see the field during the game and random TDs happen. Really, I look at these all the same. Trammell got 2 targets last week, catching one for 8 yards, but McCutcheon has had four targets but hasn’t caught a pass yet. Hopkins really needs Higbee to go down with injury if he is going to do anything, but he has shown his ability previously. And again…..you don’t need much to happen here to hit value.

Cole has been working as the WR3 for the Raiders with Hunter Renfrow on the sidelines. Although he has been on the field a decent amount, he hasn’t had too much involvement in the offense. Since Week 10 he has totaled 6 targets for 3 receptions for 33 yards. He is being used on punt returns, and has shown big-play ability during his time with the Jaguars earlier in his career.

Normally I wouldn’t really consider the Raiders DST ($5,200), but this isn’t a normal game. The Raiders pass rush has shown it can get after the QB and the Rams offensive line is just awful. When you then consider the fact that the guy making the decisions in the pocket is going to be Wolford or Baker Mayfield (after next to no time with the team), it’s not an awful play. The Rams DST ($3,400) are without their star piece Aaron Donald for this one, but they still have playmakers. Carr has made some bad decisions this season, taking sacks and turning the ball over. With the price difference, I’m happier with the Rams, but the Raiders are an ok selection too.

The kickers are both strong selections on the slate, and I’d even consider them as CPT selections. Daniel Carlson ($4,200) had been perfect on FG attempts this season until Week 11. Since then he has missed 1 attempt each week, but all from longer distances, one 40-49 and two 50+. Matt Gay ($4,000) is an almost automatic selection for me, with the struggles the offense has had. He has only missed one kick all season, way back in Week 5 (a single FG attempt from 50+). In a game that is going to have plenty of stalled drives, the kickers offer a great ceiling and floor.

So, there are our DraftKings selections for the 2022 Showdown of Las Vegas @Los Angeles! Remember any DFS questions, you can check out our articles here. Or you can find us on Twitter, Facebook, or Instagram.