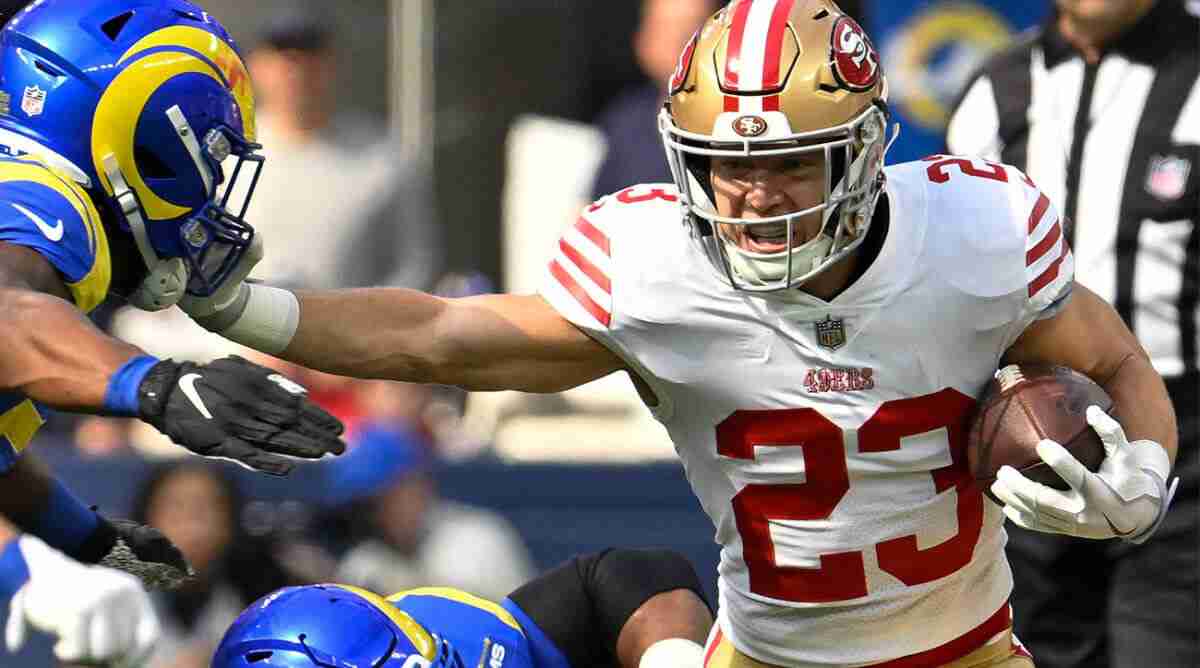 We are here to cover the 2022 DraftKings showdown slate for Thursday Night Football Week 15, San Francisco @Seattle. The O/U for this one is set at 43, with the 49ers expected to win by a FG. The narrative is going to be around the 49ers and if they can keep the wave of positivity around their rookie QB. This is going to be a big ask for him though, travelling to one of the loudest stadiums against a team that needs to get wins to make the playoffs.

McCaffrey is the most expensive player on the slate, but you have to consider him as CPT. He is looking more and more comfortable in this offense, with volume on the ground and through the air. With 3 TDs in his last two games, and a nice matchup he actually feels underpriced compared to other showdown slates. Going to be CPT for the vast majority of my lineups.

Aiyuk has been great this season, stepping up in the offense as teams look to limit Deebo Samuel. With Samuel now out, he should see a bump in targets and usage. The matchup for Aiyuk now he is the primary receiver isn’t the easiest, but the way this offense schemes players free, he should be a decent play. Nice CPT pivot on the slate, but I prefer Kittle as an option.

If I’m opting to not go with McCaffrey as CPT, Kittle is my preferred pivot. Seattle are awful against the position, with 15.8 DKPts only bettered by the Cardinals this season. With the way Kittle has been involved in the offense, with an average of just over 5 targets per game on the season, he should be able to be productive on the slate.

That trade of Russell Wilson looks great for the Seahawks, with Smith performing at a great level this season. With the receiving duo he has, he is putting up fantasy numbers that have made him a solid play for the season. The 49ers defense is only one of two that Smith hasn’t thrown multiple TDs against this season, and that pass-rush has only gotten stronger. I’ll have some shares, but I’d rather go for a receiver racking up non-TD production incase Smith struggles.

Seattle’s receivers have really benefitted from Smith being able to air the ball out effectively this season. The two of them have really similar production, which can be seen by the tiny gap in their salary. They can put up big numbers alongside each other with the target share that they both get. I’ll mix both of them in my lineups, and they are pretty much neck and neck to me. If really pushed, I’ll pay the extra $200 and go for Lockett. He performed in the reverse fixture, despite Smith struggling and he has a great ceiling.

I love the narrative around Purdy. Last selection in the draft, beating Tom Brady and Tampa Bay in his first start, it feels like a feel-good movie. But, he isn’t really worth playing on this slate for me. Seattle’s home crowd are INTENSE and this is another tough defense. The offense generally has weapons that can make plays, but that isn’t going to help Purdy pop in this matchup.

Walker is set to return for this game, which will be a massive boost to the offense. But, I’m not sure if that is going to fully translate to production. The volume is going to be there, and Seattle will be looking to establish the run before airing it out, but the 49ers are the best in the league at limiting production at the position. Feels like a floor play/ volume play, with the strength of the matchup. With Walker returning, I’m not considering Travis Homer ($7,000) on the slate. Can’t see the volume being there to do much- you’d be hoping for a random TD, or Walker to get injured. The price tag is too high for that.

Goodwin has potential to blow up with his speed causing defenses trouble as they look to deal with Lockett and Metcalf. The thing with that, is that he doesn’t really have a reliable target share in the offense. The issue is that he can really flame out though. 62% of his overall fantasy production has come from three of the 11 games he has played in. Take a shot if you want, but I’ll be fading more often than not.

Mason is the backup for McCaffrey and I can’t really see him having much go unless McCaffrey gets injured, or this game turns into a blowout. I’m not interested at the price. Instead, I’d rather take a gamble on Juszczyk. He has continued to get snaps in the offense, and has been used around the goal-line. More often than not he is going to flame out, but you could get the game he springs up for a random TD reception.

The TE position for the Seahawks is a mess. Fant is getting targets in the offense, but hasn’t really done much with them consistently enough to lock him into a lineup. The floor isn’t really there, and with a tough matchup against the 49ers, he isn’t really worth considering at the price.

Dissly has really struggled to get involved in the offense, with less than 3 targets on average per game. The upside is there though with how he has been used in short-yardage situations. He hasn’t had one of those multiple TD games this season, but he has that potential. The price allows you to build a stable lineup with the upside of Dissly. But don’t get carried away.

With Deebo Samuel out, it gives potential for one (or both) of these receivers to take a step up. Jennings hasn’t done anything of note for a few weeks, and has only had six targets in the last two games. But, his performance against the Saints in Week 12 would mean he hits value nicely here.

McCloud was the receiver that immediately benefitted from Samuel being on the sidelines, with his highest snap count on the season. Whether than continues in a tighter game is unknown, but both of these plays are going to be risky plays. Of the two, I’d opt for McCloud, who would need to do far less to hit value and could return a kick or punt for a score.

The kickers provide a nice floor on the slate, and with the top options on the slate, allow you to make some savings to stack elite pieces. I’ll have lineups with both kickers in them, as they should both be involved. Robbie Gould ($4,000) has long been an accurate kicker, missing three FGs this season with two from long range. The veteran has the ability to hit from depth too, with 2 50+ yard attempts. Jason Myers ($3,800) has been getting more attempts this season as the team have stalled on offense a few times. With the increased responsibility he has been hugely accurate, missing only one FG way back in Week 5. With FIVE 50+ conversions too, he has the leg to convert if given the opportunity.

The defenses are also worth mixing in on some lineups, but don’t go crazy. The ability of the 49ers DST ($5,000) makes them the more appealing, as their defense is a tough unit to play against and they have playmakers at each level. The Week 2 performance where the 49ers stunted the Seattle offense is the blueprint, recording two INTs, two sacks and limiting scoring. The price tag needs them to have a similar performance, and that game was before Walker started smashing defensive fronts. Seahawks DST ($3,200) are an interesting option though at the price. Purdy’s story is great, but he is still a rookie and is likely to struggle at some point. The Seahawks defense aren’t the scary unit they have been in previous years, but playing at home they should be able to make plays.

So, there are our DraftKings selections for the 2022 Showdown of San Francisco @Seattle! Remember any DFS questions, you can check out our articles here. Or you can find us on Twitter, Facebook, or Instagram.