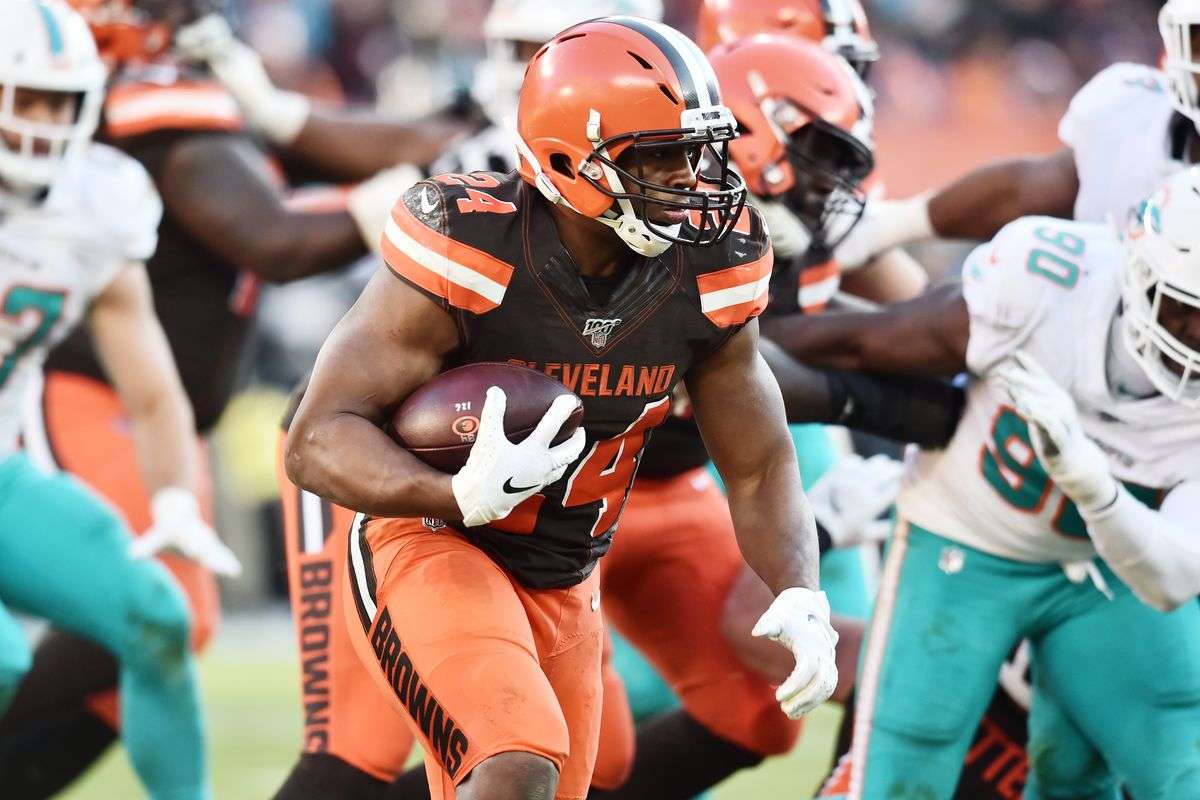 Throughout our Fantasy Football seasons, past and current, we develop a love/ hate relationship. Players we love to hate and players we hate to love.

Over a two part series of articles, I will take you through some of the players I have taking a shine too and players I just can’t vibe with, based mostly on their average draft positions, starting with players I love to hate.

Don’t get me wrong, Nick Chubb is a good running back to have on your fantasy team (after all he did rush for 1494 yards last season) and can put up solid numbers to help win your match ups, I simply don’t like paying the price for him.

Currently being drafted at the beginning of the second round in standard PPR drafts, I feel there is better value elsewhere and taking him that early is a reach, generally because running backs are going off the board quite quick at the start of our drafts.

While this is not the end of the world, in PPR format, Chubb was lucky to see 5 targets per game, which only happened in three games last season, all before Hunt returned. From week 10 onwards Chubb averaged 2.1 targets per game.

Love/ Hate: Hate. I find myself passing on Chubb this early and looking among the other remaining running backs on the board, or perhaps taking a wide receiver if any of those bigger names have dropped into the second round.

Where do I start with Amari Cooper? Well, his ceiling can be through the roof but his floor can cost you your match up possibly playing as your WR1. Cooper averaged 7.4 targets per game in 2019 with a total of 79 receptions and now with CeeDee Lamb in the picture for targets along with Michael Gallup I feel Cooper’s ceiling could take a hit as the season progresses.

Looking at his current ADP of 3.09 in standard PPR leagues, doesn’t sell him to me either. Seeing him drafted ahead of other wide receivers who I feel can offer more upside throughout the season, Cooper Kupp for example, who has a current ADP of 4.03 has a solid ceiling and his floor isn’t to bad either!  Kupp averaged 8.3 targets per game in 2019 with a total of 94 receptions, this was with Brandon Cooks in the squad who has now moved on from the LA Rams.

Love/ Hate: Hate. In this scenario, I would happily pass on Amari Cooper at the back end of the third round looking elsewhere, with the possibility of taking Kupp in the fourth round.

Ok, I know, this is an easy one for me to select, but I’m picking him anyway. It’s simple, his injuries concern me to much to put any faith in him being one of my starting running backs.

When Conner broke out in 2018 after LeVeon Bell held out for the year, he had everyone talking, being drafted in the later round of drafts he was an absolute steal.

Unfortunately 2019 was the opposite, featuring in 10 games with a mere 116 carries for 464 yards as he dealt with injuries throughout the season, in only two of these games did he see a snap count of 80% or more.

Love/ Hate: Hate. I truly hope the injuries are past Conner now, however, I want my running backs on the field as much as possible and until I see this from him, I am not willing to draft him at his current ADP of 3.10.

This may be an unpopular choice as some see Matt Ryan as the reliable Quarterback they like to wait for in drafts, letting all the “main quarterbacks” get picked earlier while they build their starting line up and pick Ryan in the middle of the draft. My issue with Matt Ryan is not so much his ADP, but more the lack of faith I have in him on a weekly basis.

Take last season for example, throwing 26 touchdowns, he also threw 14 interceptions, 6 of which where inside the first 3 weeks. In week 12 we seen the Tampa Bay Buccaneers travel to Atlanta expecting a big game from Ryan, he threw for 271 yards and 1 interception, leaving many owners disappointed with the outcome.

Love/ Hate: Hate. Yes, I know more often than not, he throws for approximately 300 yards per game in the Falcons pass orientated offence, and there will be weeks where Matt Ryan will score big, however, for me there is an inconsistency there for me to feel like I can rely on him on a weekly basis.

So that’s it, players I love to hate, and while these players may not be on my wish list, at the right price, I would certainly consider having shares in them, but for now their prices, for me, are just too high. Reach out to us, you can find us on Twitter, Facebook and Instagram.