Best Ball is becoming a more popular format, but it’s easy to get carried away and not be making good selections. If you aren’t sure what best ball is and you’ve literally never heard of it, then we covered some areas last year that can give you the real, real basics:

Best Ball, the format that allows zero room for error, no redemption. No waiver, no trade. With everything boiling down to the draft, let me walk you through some basics on how I make sure I give myself a chance to win, every time I leave the room.

In order to be a consistent winner in Best Ball, we need to truly grasp what Best Ball is. First and foremost, Best Ball is a game of risk elimination. There’s no such thing as luck in Best Ball. Your job is to place a score every week, at every position. No zeros. It sounds so simple, but if you can grasp the reasons why and why not, it starts to mold your thinking in the correct sense of risk management. Soon instead of eliminating a zero, you’re focused on high scoring, every week, at every position. Many new Best Ballers will think this is just redraft with up-side. It’s much more than that. Giving yourself a chance to win, before player evaluation, is properly grasping positional roster construction. Let’s dive into one of those initial aspects of risk management.

Ask yourself, how often is the position I am drafting, on average, going to get hurt? What is that player’s injury history? If you run too thin, injuries will lead to zeros, and zeros lead to losing in Best Ball. Therefore, if you go too heavy on a position, you will be forced to tread too light on other positions, given your ammo/players only has so many bullets/rounds.

For instance, in FFPC leagues over the last 3 years, taking only 1 Kicker in Best Balls drafts, historically leads to a sub 1.8% win rate, and 5 kickers lead to a 4.2% win rate. The optimal number drafted over time has shown to be 3 kickers, producing a 9.5% win rate. 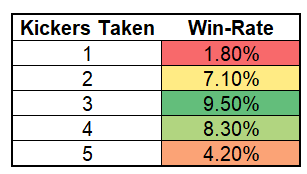 But why 3 at this position? The number 3 appropriately splits the line between too little and opening yourself to direct positional kicker risk, and too much leading to opportunity cost at other positions and forced bench allocation.

Risks on the thin side can be;

Ask yourself; have I secured starting, healthy kickers, with good contracts, that will most certainly play this season, have they proven it? Especially address these questions earlier in the offseason.

Matt Gay and Robert Aguayo had prime ADP for unproven Kickers for the Bucs as of recent, both provided huge busts at the ADP. Matt Gay went as high as Kicker #3 in drafts last year, and he was ultimately waived a few days before the season kicked off. For example, what added EV+ have I gained from taking a risk, on a say, projected ranked Kicker 18, but one who has stormy clouds on his horizon (IE: Coming off an injury, past the age apex, the respective team used early draft cap on a Kicker in draft, ended the season poorly, and out of contract.) vs. a later K19-23 that don’t pose the same risks, when their expected point total is marginally different?

Say the expected points-for metric for K18 vs. K23 is less than projected ~1 point a game, is it worth the risk to take a player with underlying issues? Sub ~1 point difference a game, means one game missed and that projected edge is erased.

What that means for you when drafting

I don’t want guesses in Best Ball. This is not a magic number, it’s a risk assessment. We need to learn from prior drafting mistakes. The reason your mind is programmed to not care about little things mentioned above, is because you can always snag a Kicker off the waiver wire. There is a very large difference between redraft allowing you to have 14+ weeks of waiver ammunition of talent, vs. an entire Best Ball season of being stuck with your draft picks. Make them count.

This may seem elementary, but the concept is important. Especially for a position that can only score one starting slot. An RB, TE, or WR can start for 4 positional slots, if you count flex, with additionally being able to play on the field at the same time as someone else in their position. QB would be the worst position to draft the incorrect number.

We aren’t playing one instance of Best Ball. We want to be in a large sample of leagues, and to control our exposure to individual players. This means, having a balanced, structured team. Typically, its wise not to stray from win rates with a sample size of thousands of drafts. You need to pay attention every single round, for every position, so next time you can take advantage of your competition falling asleep late in drafts.