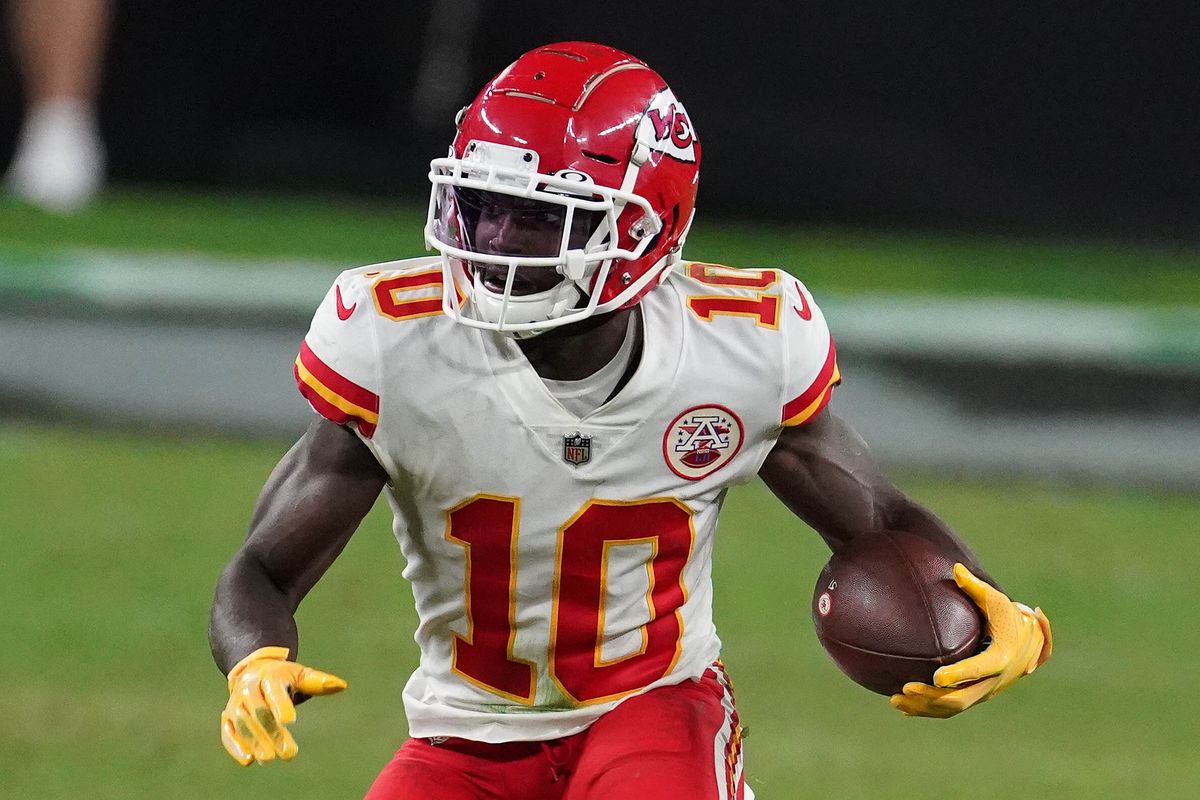 Here we are deep in the fantasy playoffs season of the NFL 2020, and time for my DraftKings Week 16 Selections from the Main Slate of games. For those of you whose fantasy football seasons may be over, there is no better time to get involved with Daily Fantasy Football, especially with the actual playoffs just around the corner!

Throughout the season, I have been providing players that I feel you should be including in your lineups, with some rationale and this week is no different! So, let’s dig into whom I am thinking of slotting in my lineups!

Since stepping in for Wentz as starting QB, Hurts has been the spark that Philidephia has been looking for on offense. Hurts’ average of 32.05 DK points in his two starts empathises this.

Also, in Hurts’ two game-sample as a starting QB, he is above league average in key metrics such as deep ball attempts (5 attempted per game at a 40% completion rate. League avg = 3.8 attempts) and Hurts’ air yards per attempt at 3.9 is higher than other quarterbacks like Aaron Rodgers (3.8), Teddy Bridgewater (3.6) and Jared Goff (3.3). Both the highlighted metrics are often positively correlated to high ranks in QBs historically.

As well as those indicators, you have Hurts’ rushing floor, which in his two starts has averaged out at 84.5 rushing yards and 0.5 TDs.

With the Philadelphia defense, being as poor as it has been in the secondary, their games have been shootout-central as of late. This Dallas offense has enough in the tank to keep up with Hurts, therefore making the rookie QB an excellent play for your lineups this week.

The Chicago QB falls in that classic price range of $5,500-$6,000 in which achieving the desired 3.5 to 4 times value is very achievable.

Week 16 sees Trubisky take on Jacksonville. Since Week 11, Jacksonville has given up 22.5 DK points per game to the QB position, ranking them 23rd in the league. On top of this, Jacksonville allow the highest pass Defense-adjusted Value Over Average (DVOA) in the league at 29.2%.

With Trubisky averaging 2.12 passing TDs per game, he has started this season, as well as the high implied total (27.75) for Chicago in this total, Trubisky, for me, is the best value QB on the main slate.

What is there not to say about Montgomery over the last month? The Chicago back has been the fantasy RB1 over the previous four weeks.

As mentioned, Chicago takes on Jacksonville this week, a team who allow fantasy points for fun to all positions. Jacksonville since Week 11 have allowed 31 DK points per game to RBs per game, the third-highest amount over this period in the league.

Furthermore, Montgomery in Week 15 saw 100% of the touches among RBs in Chicago with 33 touches, and this included minimal contributions from Corradelle Patterson.

I would expect similar in Week 16 in this matchup.

Sanders is a play that was not initially someone that caught my eye, but as the week has gone on, I like the Philadelphia running back this week.

The introduction of Hurts as the starting QB has opened up the run game for Sanders, seeing the running back hit 18 carries in each of the last two games, including a 32.5 DK point performance in Week 14 against New Orleans.

Sanders and Philidelphia are taking on Dallas in Week 16, a team who since Week 11 have allowed 31.4 DK points to RBs, the second-highest amount in the league, only worsened by Houston.

Whilst I would not place both Hurts and Sanders in the same lineup, there will be plenty of lineups with either one of them in this week.

With the unfortunate news of Cam Akers injury, the door opens once again for Henderson to get the bulk of this backfield workload.

Some people may be put off by the matchup here for Henderson in Seatle. However, the Seattle defense has been sneakily bad against the RB position as of late, giving up 25.4 DK points per game since Week 11.

The price for the Cheetah is a significant one, but it is more than justified. Just look at the matchup for starters, Atlanta since Week 11 has given up the third-most points per game to the WR position at 43.9, only topped by Detroit and Tampa Bay.

When we look at Hill as a player this season, the positive stats continue:

Do not be afraid of the price point here; play the receiver with confidence.

Higgins was a surprise target share leader from the Week 15 games, coming in with a 46.2% target share (per @TJHernandez) from Ryan Finley in his first start.

The rookie has stepped up to the plate in all the madness at Cincinnati, seeing 86.1 air yards per game (joint 15th among WRs) and 97 targets (20.6% share) on the season.

Higgins’ opponents, Houston have been a poor defense all season. Since Week 11, Houston has given up 41.6 DK points to the WR position.

This Houston-Cincinnati game has sneaky shootout potential with how poor both defenses are, and Higgins seems to be one of the best selections from this game.

Hansen should have fun against his matchup in LeShaun Sims this week. Sims’ assignment was Gallup last week, who was having fun with the corner, catching three receptions for 26 yards and a touchdown before getting hurt. Hansen has seen the production to do very similar if not much more than the Dallas receiver managed last week.

I feel Cincinnatti will fall victim to playing a great QB in Watson this week and give up the yards in the passing game, with Hansen being one of the prime beneficiaries of this.

Honourable Mention: Russell Gage ($5,100) – Heavy pass-script projected for this game will see Gage get the target share the Atlanta receiver has been seeing the past three weeks (8-10 targets). Plus the predominately slot receiver has had touchdowns in 2 of the last 3 weeks, so Gage possesses that upside whilst Julio is out.

Do not think this selection needs much explaining.

Kelce runs the highest amount of routes per game on average (40.75), alongside Logan Thomas ($4,900). This is in addition to having 10+ targets in three back-to-back weeks thrown his way, as well as Kansas City, Kelce’s team having the highest implied team total (32) in Week 16. If you need even more convincing, Kelce leads the league for qualified tight ends in air yards per game with 81.1 yards, a key metric in determining success when it comes to tight ends in particular.

Yes, the price is a lot of your salary, but the saying of ‘paying up for your studs’ could not be more relevant, especially ones who are matchup proof like Kelce.

Many DK players were relying on Kmet a lot last week to be that budget-saving smash play option, and unfortunately, it did not pay off. However, the Chicago tight end remains a great budget option in Week 16.

Despite not seeing the targets from Trubisky last week, Kmet saw his highest snap count of the season at 100% and anytime someone is on the field that much, they are destined to run routes and be a passing option.

Last week feels more like an anomaly for the rookie tight end. My expectation is consumed by Kmet running more than the 18 routes he ran last week and ultimately being a more favourable look for Trubisky against Jacksonville.

Honourable Mention: Harrison Bryant ($2,500) – New York has given up the most TDs to TEs (13) in the league this season so Bryant might be a worth a punt play if you need a ‘stone-min’ paydown option. Bryant has been getting consistent targets the past weeks, including in the red zone and will have one of the highest team totals on the slate, typically a positive metric for tight end success.

This week sees my continuation of targetting the Seattle offense with the pick of Los Angeles.

Wilson, Seattle’s QB gets sacked at a per-game of 2.8 and tends to throw interceptions, with 13 picks thrown in 14 games so far this season (0.92 per game). In fairness, Wilson does complete 49.6% of his passes when pressured, fourth-highest among qualified QBs. However, the quantity of pressure from opposing defenses is the worry here.

In addition, Los Angeles has a history this season in performing well against this offense, scoring 13 points last time they met in Week 10.

Los Angeles is coming off of a humiliating loss against New York in Week 15 and will want to bounce back in a crucial divisional matchup that is a must-win game.

NFL 2020: DraftKings Week 16 Selections – My lineup as it stands

So, there are our DraftKings selections for Week 16 of the NFL 2020 season! Who have we missed out? You can find us on Twitter, Facebook, or Instagram. And remember, if you need some help for your season-long leagues you can find our rankings here.