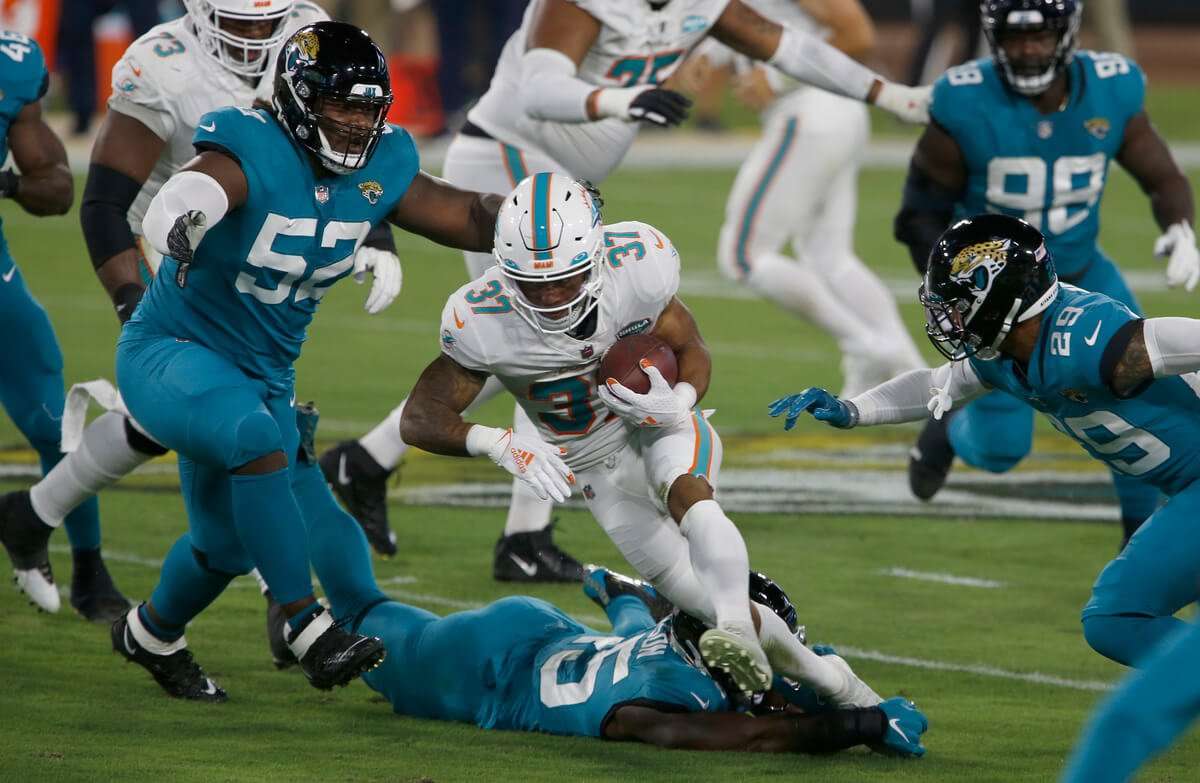 The 2020 NFL season is well and truly underway, meaning time for some DraftKings Week Six selections! The weeks have seen some great action on the field and some big scoring players. Hopefully, that continues for this week and beyond!

Throughout the season, I shall be providing players that I feel you should include in your lineups, with some rationale. So, let’s dig into whom I am thinking of slotting in my lineups for Week Six!

An excellent differential play for your lineups comes in the form of Minshew, who has been very consistent to open the year. Minshew has put up 20+ DraftKings points every week so far that has been a non-primetime game, which was only the one against Miami. In addition to a rushing upside, which is typically around the 20-yard benchmark adds the potential for more points and the upside you should be looking for.

Jacksonville takes on a Detroit team who are on the road and coming off of a bye, so may start sluggish. Furthermore, the Detroit defense has been giving up 350+ total yards of offense per game, and this Jacksonville offense is more than capable of continuing this trend.

It is worth keeping an eye on the health of D.J. Chark, who was missing from practice to start the week. If Chark is a no-go for Sunday, perhaps pivot to my other quarterback selection.

We have been no strangers to targetting this Atlanta defense as a whole in 2020. When you are giving up an average of 446 total yards per game, that is about as much justification as you need.

Minnesota and Cousins are the next team to have the pleasure of taking on this defense, hence Cousins’ inclusion! In Cousins’ two home games this season, he has produced 20+ DraftKings performances in both, hitting that threshold you need in your lineups. His pass-catchers, Thielen and Jefferson seem to have a prominent 1A-1B partnership which is giving Cousins more options to spread the play and more DraftKings points.

Atlanta gives up a league-high 33.1 DraftKings points to the quarterback position so if Cousins was to over-exceed the numbers he has been producing; it would be in this matchup.

Making Cousins a play in your cash and tournament lineups is something you should be okay with doing, despite his past performances in 2020.

With Christian McCaffrey still likely to be out for Week Six, Davis looks a great play at home, from a volume perspective alone. Since Davis’ introduction as the team’s starting back, he has collected thirty receptions in less than four full games which is incredibly high. This is not without missing his thirty-two carries in the last two weeks, sixteen in each week.

This type of volume that Davis is seeing is DFS gold, no matter the matchup he comes against. Chicago is a middle of the park team at defending the running back, giving up a per game average of 23.2 DraftKings points.

I do not usually play the running back on the other side of a matchup. However, Montgomery going up against Carolina was too tempting not too.

You know the drill regarding Carolina’s run defense. They are still the worst defense in the league, giving up an per game average of 37.4 DraftKings points.

Montgomery, despite not an impressive yards per carry average at 3.9 on the season, his work in the passing game has topped him up. This was particularly apparent in Week Five with seven receptions and lead to an 18.9 DraftKings points performance.

Montgomery will be a fairly chalk play this week in lineups so you would have to be a bold person to fade the Chicago running back this week.

Finally, for this section, we feature one of the surprise bellcows in 2020 in Gaskin. Gaskin has seen 61 touches in the last three weeks, averaging out over that twenty touch border that many consider you need to have in your DK lineups for success.

Furthermore, Gaskin seems to have finally taken over the red-zone responsibilities with his four carries and three targets in the win over San Francisco. Admittedly there was no Jordan Howard last week. However, I have confidence that this will remain to be the case in Week Six, where Miami take on this hopeless New York team at home.

This week could be the game that Gaskin has a big game, far exceeding his 20.1 DraftKings points game he saw on the road in Week Five.

Despite only playing two games this season, Golladay has seen a consistent target share and put up two solid performances at 17.7 and 16.2 DraftKings performances. Golladay, coming off a bye now takes on a Jacksonville team who ranks as the 30th defense overall for total yards given up, with a per-game average of 417.2.

With Golladay being Stafford’s main man, the Detroit wide receiver should take advantage of this matchup and produce in your lineups.

Now you may be wondering why I am suggesting a New York player but hear me out.

Crowder, in the three games he has played this season has averaged 25.5 DraftKings points. This is also with two alternate quarterbacks in Darnold and Flacco making the stat line ever more impressive.

Besides Jeff Smith, Crowder is the only player on this offense consistently seeing targets, and a Miami defense will do well to stop Crowder’s production in this Week Six matchup.

Offering a nice stack with quarterback Cousins, rookie Jefferson comes in at an excellent price for going up against Atlanta.

Like the quarterback position, Atlanta are more than happy to allow wide receivers to have big days against them. Atlanta has allowed an average of 44.6 DraftKings points to the wide receiver position, which ranks seventh-highest in the league.

After a down week in Week Five, Cousins will be looking to get the ball to Jefferson in this favourable matchup, and I do want to miss on another big Jefferson performance!

Smith, to start the season, has had a consistent target share from quarterback Ryan Tannehill. Smith has seen at least a minimum of five targets per game in 2020. The rescheduled game against Buffalo in Week Five saw Smith see five receptions for 40 yards and two touchdowns.

What makes Smith just a great play every week also is the fact that Smith is getting red-zone targets every game he plays. He sees at least one red-zone target per game, and if he can bring in his targets for touchdowns as he did in Week Five, then we are looking at a great play in your lineups.

After a disappointing performance from Ebron last week, we are going back to the well in Week Six in the hope that this week goes a bit better.

The fumble dominated Ebron’s 8.3 point Week Five performance, in what was a very favourable matchup against Philidelphia. Luckily for Ebron, a redemption game comes in the form of high-flying Cleveland.

Whilst Cleveland’s offense has been performing well, their defense, as mentioned previously, is susceptible to the passing game and that does not just limit itself just to the wide receivers. Cleveland allows 17.6 DraftKings points to the tight end position, which is bottom ten in the league.

Ebron should continue to get the targets in this offense and is once again is at an attractive price.

This Washington defense has had a tough start to the season, giving up 300+ total yards every week since their Week One success over Philidelphia, netting them fifteen DraftKings points.

Washington in Week Six travel to the Big Apple to face a New York team led by Daniel Jones. Despite the anomaly of last week, the New York offense has struggled to get going, averaging 11.75 points per game in 2020.

With players like Chase Young returning to the defensive line last weekend, the potential for sacks is there against a quarterback who has been sacked 16 times already this season, which is joint fourth-highest.

A repeat of Washington’s Week One performance is more than viable looking ahead to Week Six and therefore are my favourite option at the position.

If you need the ultimate paydown at the position, why not target Miami against a New York offense who has been nothing short of abysmal.

The twelve DraftKings points generated by the Miami defense in Week Five showed they can create turnovers. Five sacks and two interceptions proved this. This type of performance is what we needed to see from this defense ahead of a more than favourable matchup.

With this New York offense averaging only fifteen points a game this season and now with Flacco confirmed to start on Sunday, this Miami defense should be an excellent play in your lineups.

So, there are our DraftKings selections for Week Six of the NFL 2020 season! Who have we missed out? You can find us on Twitter, Facebook, or Instagram. And remember, if you need some help for your season-long leagues you can find our rankings here.