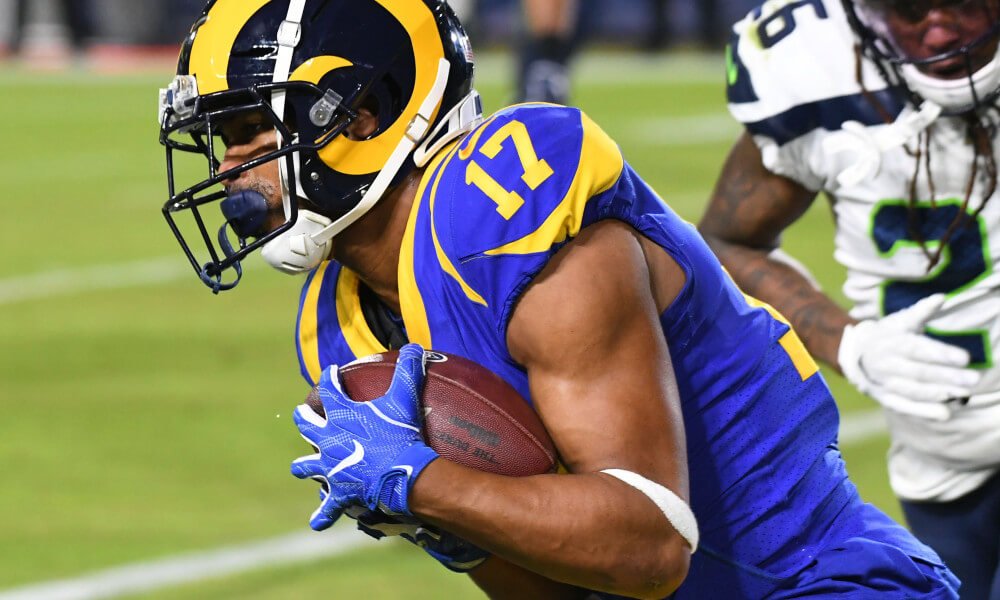 Robert Woods hasn’t been the player many expected him to be so far this season but is it time to panic? The Los Angeles Rams offense has looked great so far this season. Revamped with Matthew Stafford at the helm, the Rams are 3-0. Stafford has thrown for 942 yards and 9 touchdowns in three games. That puts him 5th for quarterbacks by yards and 2nd in terms of touchdowns.

This all makes the Rams offense an exciting prospect for fantasy, which is something we were hoping for in the off-season. This is proving fruitful so far for Cooper Kupp, who finishes week three as the overall WR1. Kupp has caught 25 passes for 367 yards and 5 touchdowns. All three of those are top in the NFL.

However, the other main part of the Rams receiving game hasn’t looked as good. Through three games so far, Robert Woods has caught 11 passes for 124 yards and 1 touchdown. Throughout the off-season, there was constant debate about which Rams receiver would be the one to own. Consensus ADP had Robert Woods at 42 overall in 1QB leagues, which saw him go at the back of the third round or top of the fourth. This was a whole round earlier than his teammate. Now, it seems obvious that the answer was Kupp.

However, I think it’s too early to sit Robert Woods and that you should not be panicking just yet. Here’s why.

The Rams passing game has seen an uptick in volume since the previous season. It seems apparent that they are much happier throwing the deep ball with Stafford, stepping away from the dink and dunk offense that we saw for years under Jared Goff. Looking through the stats so far, Stafford is averaging more yards per game than Goff did last year (and by a lot, with 314 compared to Goff’s 263). Stafford’s average yards per completion is also higher than Goff’s from last year, at 10 yards compared to 7.2 for Goff. On passer rating, it isn’t even close. Stafford is at a rating of 129.8 compared to 90 for Jared Goff.

This all comes from a limited sample size. However, it tells us a few things. First of all, the Rams are passing more than they did last year. But more importantly, they are passing better than they did last year. Sean McVay is showing a willingness to be more aggressive with his playcalling and the playbook is clearly going to open up even further across the weeks to come.

For me, that means positive regression for Robert Woods is on its way. Woods is too talented a receiver to simply be schemed out of games. Yes, they have a good receiving core, with Van Jefferson and DeSean Jackson waiting in the wings, as well as tight end Tyler Higbee. But it’s clear to me that the way that Stafford is passing means that Robert Woods is about to get his share.

This can be seen in the snap count – Woods was actually on the field for 88% of snaps against the Bucs. This was actually slightly more than Cooper Kupp at 82%. With Woods staying on the field this much, it’s easy to see that his role in the Rams offense is still secure.

It was always going to take time for the Rams offense to truly click under Matthew Stafford. Even in the Bucs game, Stafford started 1 of 6, with Kupp and Woods both dropping passes, and a very clear dropped interception from the Bucs. Even with Stafford currently playing as the frontrunner for MVP, chemistry still takes a while to develop.

Alongside this, it’s been clear across his career that Stafford has a tendency to key onto a particular wide receiver for a particular game. That was completely justifiable when it was Calvin Johnson. But we’ve also seen Stafford do this with Golden Tate, Kenny Golladay and Marvin Jones in recent years. I believe that the volume seen with Cooper Kupp in the first few weeks of the season is not something that is going to last. When things are working, Stafford likes to force-feed a receiver. You can see this even just from looking at the last five weeks of the 2020 season for the Detroit Lions, with Marvin Jones seeing over a 50% target share in four of those weeks. This will inevitably mean that Kupp-like weeks for Woods will be on their way. This is what we anticipated in the off-season – up weeks for one meaning a down week for the other. It’s just that we’ve started with three straight-up weeks for Kupp.

The Rams culture is an important part of all this. McVay built the team with a “We, Not Me” mentality. This is a sentiment often echoed in postgame press conferences by players and coaches alike. One of the reasons that the Rams love Woods and Kupp as receivers is their willingness to get stuck in to all aspects of the game. The two are versatile and keen to contribute to the running game as well as catching passes. As a Rams fan, I believe it’s only a matter of time before things click with Woods the way they have with Kupp early on.

The Rams are 3-0 so far and it hasn’t looked particularly difficult for them. Against the Buccaneers, the plan emerged very early on and they stuck with it. Target the Bucs weakened secondary with shots over the top to Jackson, whilst scheming Kupp open in the intermediate game. That was clear to see throughout, but even more obvious from Kupp’s first touchdown. Look at the clip below – Kupp is about five yards open.

I love Kupp as much as anyone, but it’s clear that his separation was hugely in part due to the game plan from Sean McVay and offensive coordinator Kevin O’Connell. That’s also hugely down to the work of the other receivers – something Kupp credited in his postgame interview. In weeks to come, the game plan is certain to change. With potential shootouts coming against the Cardinals and Seahawks soon, we will see whether McVay involves Woods more in the passing attack.

Woods’ ADOT (average depth of target) so far is an indicator as to his role in this offense. Currently, Woods’ ADOT sits at 9.08 yards, a little higher than Kupp at 7.71. Woods is as talented a YAC receiver as Kupp is, which is something we’ve seen in the previous years. With the game to come against the Cardinals talented DL (seen with Chandler Jones’ monster week one five sacks), it could be that Woods is used in a similar role to Kupp. Routes run underneath provide the opportunity for yards after the catch, which is somewhere Woods excels, finishing 8th in the league in yards after the catch for the 2020 season. Woods is a versatile player too, who has been used a few times in the running game already this season. With closer games to come, different game scripts will see McVay needing different things from his weapons. It’s clear to me that Woods will be a part of that.

What should you do?

Thankfully, I believe we’re about to find out the landscape for Robert Woods rest of season. The Rams next few opponents are either division rivals or games that they should be winning in a landslide. The Rams next four games are against the Cardinals, Seahawks, Giants, then Lions. The first two have the potential to be shootouts, perhaps high-scoring games where we’ll see if Woods is brought in as more of a factor. The easier games (sorry Giants and Lions fans) may give the potential for McVay to open up the playbook and use Woods in a more versatile role.

I’m buying Woods as a candidate to bounce back in the next few weeks. If I’m wrong, it won’t be the first time. But as a Rams fan, I’d be surprised if we don’t see a large uptick in volume for this talented receiver sooner than we think.

But, each league is different, so feel free to reach out and we can try and work out some trades together. You can find us on Twitter, Facebook, Instagram, or jump into our Discord server