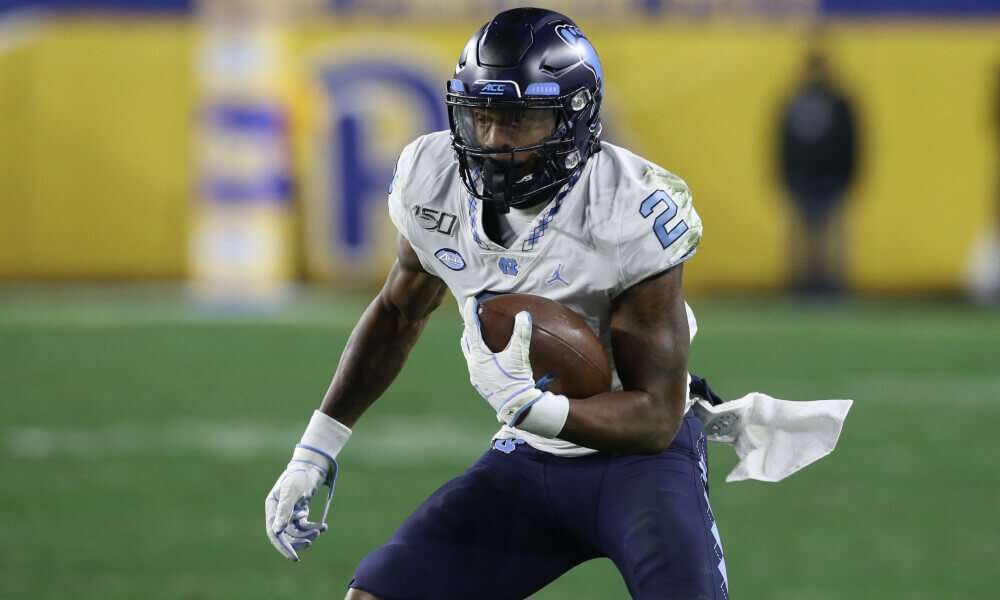 Welcome into the rookie profile for Dyami Brown, a deep route specialist out of North Carolina. Dyami made himself known in the college scene with two 1000 yard seasons as a sophomore and junior on only 51 and 55 receptions respectively. He has great deep ball tracking skills which compliments his great top speed. All of this earned Dyami a 4-star recruit status coming out of high school. Although he tends to be a boom or bust player, since 2019 he scored once every 5.3 catches. Because of his deep ball speciality, corners often elect to play off man coverage over press, allowing Dyami to threaten a deep route and quickly flip into an intermediate route with immediate separation. He has the versatility to play both in the slot and out wide, however I would expect him to be a primarily out-wide receiver in the NFL.

Dyami Brown was a 4-star recruit (per 247sports) coming out of West Mecklenburg High in 2017. After committing to the University of North Carolina (UNC) and staying within his home state for his college career. It only took Dyami a season to earn a significant role in the UNC offence. In 2018 – his freshman year – he played in 9 of 11 contests, pulling in 17 receptions for a measly 10.2 yards per catch (YPC). Dyami was lost in the depth chart at this point. Nothing to get excited about.

Once Sam Howell joined the Tar Heels (UNC) in 2019, Dyami became one of the focal points in this offence. Dyami was second on the team in receptions, only behind Dazz Newsome like the year prior. Dyami pulled in 51 catches for over 1000 yards – nearly doubling his average YPC on figure from 2018 (and ranked 8th in the country) – a figure he would maintain for the rest of his college career. He pulled in 12 touchdowns, ranking 12th in the college scene, behind NFL bound receivers such as Ja’Marr Chase, Justin Jefferson CeeDee Lamb, DeVonta Smith, etc. He averaged a touchdown each game he played that year. He was also named to the All-ACC first-team.

In 2020, Dyami’s yards per reception dropped a little but stayed above that 20 mark (only just), putting him at 14th in the college scene. He was the only receiver to average over 17.5 YPC and have over 1000 receiving yards. His reception count did not increase dramatically, nor did his yards, but he became the primary receiver by receptions (55 to Dazz Newsome’s 54).

Dyami’s deep threat ability was one of the best in the collegiate scene. His deep routes aren’t just straight lines, they have small twitches, stutters or slight hip changes that will draw a defensive back to make one wrong step while Dyami breezes past. Then, to compliment these routes perfectly, he could be seen as one of the best in this class at tracking the ball in the air – and can adjust to off target throws when needed. Even with his lower weight, he plays extremely physical at the catch point, consistently winning battles for jump ball positioning. His game is underrated when looking at him as a whole. He averaged 18.7 YPC during his college career showing him to be a great deep threat.

Dyami really lacks a second gear speed. He doesn’t possess top end burst and acceleration which means getting to his top speed can take a little longer than expected. He needs to expand his route tree to include more short and intermediate routes as he struggles in both of these areas of the field. He needs to learn to create more separation when facing press coverage. When going into and coming out of breaks, he tends to take an extra step, or look sluggish.

Many mocks have Dyami being taken in the 2nd round. I tend to agree with this assessment.

Dyami could be a great number 2 or 3 on the depth chart for any team needing an immediate deep threat receiver. I can see Dyami becoming a team’s second receiving option within his first two years in the NFL. I do think Dyami will struggle if he is asked to be the top receiving target – such as Detroit.

If Dyami is added to an offence like the Green Bay Packers (to replace Marquez Valdes-Scantling), Los Angeles Chargers or Philadelphia Eagles, I can see him being given a valuable role to contribute within the first two seasons of his career.

Dyami needs time to develop his route tree. If a team can afford the time for him to build on his short game, while using him as a deep threat primarily, he should succeed at the NFL level.

I was shocked to see Dyami fall to the mid 3rd round on Day 2 of the draft. Although I did predict Washington taking him, while I was on a call to league mates, I did so a whole round earlier. Washington slipped my mind when writing the Pre-Draft section on this profile. Although Curtis Samuel is a great player, and Terry McLaurin will continue to be great for them too, they lack a deep threat.

Ryan Fitzpatrick, the starting quarterback for Washington, is not one to shy away from throwing balls up for his receivers to come down with. He’s shown that throughout the past few seasons with Miami and Tampa Bay.

Depth chart wise, Washington don’t have another receiver that should be pushing Dyami for snaps – unless one surprises in camp – so Dyami should be a starter for them immediately.

Another note to make for him, Terry McLaurin’s contract ends after the 2022 season and Washington can get out of Curtis Samuel’s contract after 2022 too. Although I don’t think Dyami would be the only one left there, he has a good chance to be the WR2 on the team in 2023, if he doesn’t overtake Curtis Samuel sooner.

In my eyes, Dyami is a rich person’s Marquez Valdes-Scantling. During Dyami’s rookie year, I can see owners getting frustrated with hot and cold weeks while he gets accustomed to the NFL level. I do believe he will overtake Curtis Samuel by the end of the year, allowing for more opportunities. If the value is there, I do think he would be a solid late round pickup in best ball contests. Ryan Fitzpatrick should give Dyami enough of a shot to earn trust in deep routes. I’d expect Dyami to be a low reception, high yard receiver as he was in college. Dyami will not be an immediate contributor for your dynasty team, and I’d struggle to take him in any redraft league but a ridiculously deep one. If you take him in your dynasty rookie drafts, make sure to remember a dynasty is more than this year. Keep him on your roster as I do think it will take time for him to develop. I am comfortable taking Dyami in the early 3rd, maybe the 2.12 depending who is still on the board.