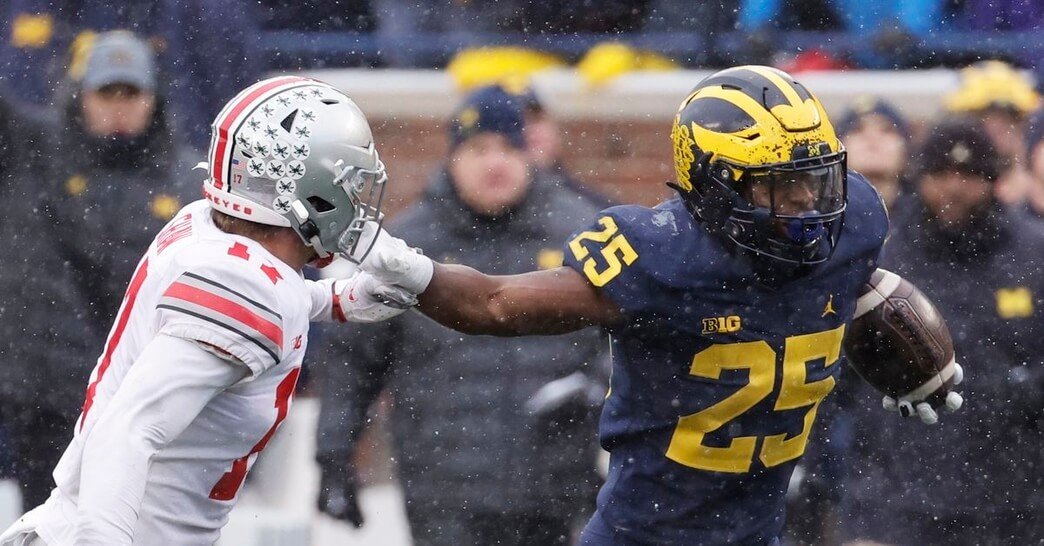 Welcome to the rookie profile for Hassan Haskins. Haskins is a powerful runner who only had 1 year of playing RB full time in college in 2021. But those 20 TDs vaulted him into the middle-round territory of the NFL Draft.

Haskins was a relatively unknown recruit out of Eureka High School Missouri and was scouted by Michigan coach Jay Harbaugh who convinced the team to swoop in for the RB. Haskins actually changed position to linebacker for a year, but it didn’t go to plan, and was converted back to his natural position.

He mainly played a supporting role in the Michigan offense in his first 2 seasons averaging 10 rushing attempts per game and seeing very little usage in the passing game. He was also featured plenty on special teams throughout his early college career.

He found his way to the top of the roster in his final season in college in 2021 and exploded with production. Haskins led the team with 270 rushing attempts for 1458 scrimmage yards and 20 TDs, playing in all 14 games. He earned himself plenty of personal accolades including consensus first-team All-Big Ten selection and All-American selection by the American Football Coaches Association (second team).

Genuinely has decent hands when catching the ball but was not used much in the passing game with only 18 receptions in his one full season (14 games). Good size RB who runs with power and has quick lateral shiftiness. Has shown excellent pass-blocking ability. Gives it 100% effort every single attempt and never drops his tempo. Has a nose for the end zone, not many RBs score 20 TDs in a season.

Long speed isn’t there when hitting the open field. Sometimes finds it hard to run with a strong, low sense of gravity. Being 6 foot 2 he can be easier to bring down than a stockier, more elusive back.

The Tennessee Titans already have the King on the roster, arguably the best running back in the NFL. The only problem is that he’s 28 years old and for an RB that’s on the older side. That inevitable cliff that has been spoken about for at least 2 years has to be getting closer.

Henry was on a record-setting pace last year before perhaps his huge workload proved to be his ultimate downfall and a fractured foot ended his season. D’Onta Foreman and Dontrell Hilliard proved adequate backups as the Titans snuck in to take the No.1 seed in the AFC. Foreman left in the offseason as a free agent, Jeremey McNicholls joined the Falcons, and Darrynton Evans has been recently claimed by Chicago off waivers.

This leaves just Henry and Hilliard on the roster and gives Haskins a great chance to make the team and see some NFL action as early as year 1 if Henry picks up any injury or if the team chooses to shut him down one game.

As always with day 3 RBs you need to temper expectations and proceed with caution. Haskins has only played one full season in college as a starter but certainly didn’t disappoint. He showed his toughness to last all season and the ability to carry a solid workload.

Haskins has 2 RBs ahead of him on the depth chart entering OTAs and training camp. That’s not a big number for a Day 3 running back who can often enter as the 4th/5th option down the pecking order. His path to relevance could open up in 12 months. Henry is at the wrong end of his career at 28 and Hilliard only signed a 1 year deal with the team.  You have to believe the Titans would bring in bodies to replace these guys, but Haskins has a real chance to prove he can be a competent RB when called upon this season.

Haskins is available in the later rounds of rookie drafts and very deep into startup formats. Guys with the upside of Haskins are always worth rostering if you have the room as they are only 1 major injury away from serious snaps and can spike in fantasy value.