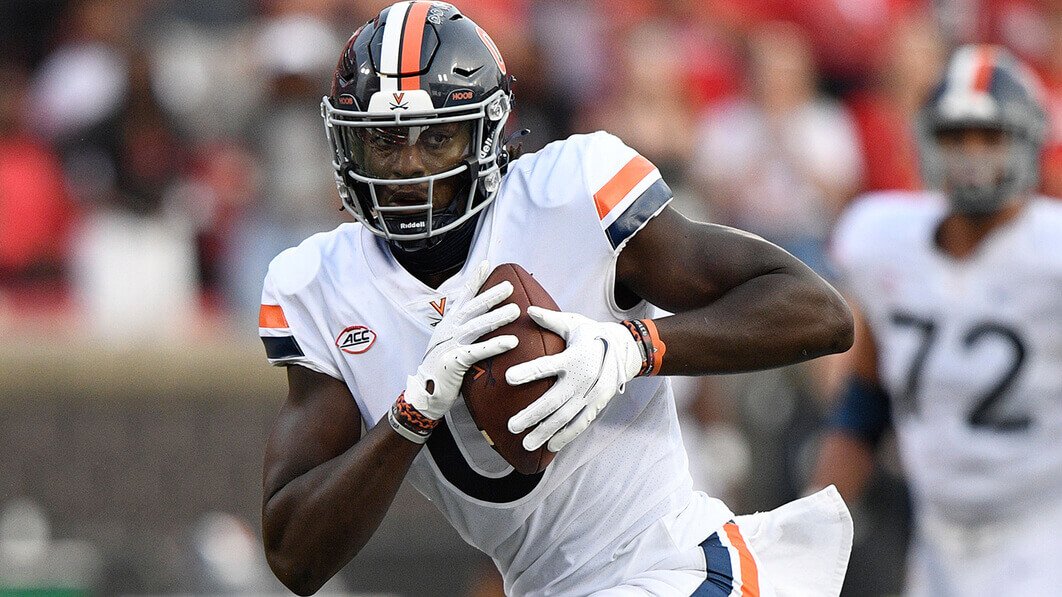 Welcome to the rookie profile fo Jelani Woods. Woods really came out of nowhere this season following three lackluster seasons with Oklahoma State. It was obvious he had the size and athletic ability, but it never came to fruition with Oklahoma State. Once he transferred to an explosive Virginia offense, he drew the eyes of scouts and fans alike. He was a reliable target and red zone threat for the Cavaliers.

At 6’7” and 230lbs, Jelani Woods was originally recruited as a quarterback. He was the 31st ranked pro-style quarterback and committed to Oklahoma State. After redshirting his true freshman season, he converted to tight end his redshirt freshman season where he contributed a modest 7 receptions, 120 receiving yards, and 2 touchdowns in 7 games. His next two seasons with Oklahoma State were more of the same. He never broke the 150 receiving yard mark but granted, his redshirt sophomore and junior season the passing attack as a whole was stagnant. Spencer Sanders was the quarterback for the team and the team as a whole never broke the 3000 passing yard mark.

In 2021, Woods decided to transfer out of Oklahoma State to play for the Virginia Cavaliers. This offense was a stark difference from what Woods was used to. Oklahoma State focused on their defense to win them games, whereas, Virginia threw the ball all over the field. Brennan Armstrong, the Virginia quarterback, threw for almost 4,500 yards and 31 touchdowns in 2021. Woods was a massive beneficiary of this as he hit career highs in games played, receptions, yards, and touchdowns. His exciting final season earned him First-team All-ACC honors and really put him on the map as an NFL Draft Prospect. Not only did his film and break-out season help his draft stock, but also his athletic testing numbers. His 4.61 40-yard dash is 89th percentile for TEs and translates to a 115.4-speed score – 94th percentile. Add that on to his 130.1 Burst Score (95th percentile), 11.28 Agility Score (82nd percentile), and 10.42 Catch Radius Score (98th percentile), it really paints the picture of a top-end athlete.

What stands out the most about Jelani Woods is his size and frame. He stands at 6’7” and 259lbs with a huge wingspan. Those physical traits show up on tape as he plays the ball in the air like a basketball player, boxing out the defender and not letting the defender get a chance to defend the catch point. He also uses that huge frame to utilize leverage when he runs routes, consistently gaining inside or outside leverage and again just not letting the defender in/out to contest the catch. In terms of his length, he has the ability to outstretch his arms, catching the ball away from his body and giving his QB a huge catch radius and the ability to put the ball in a spot that the defender can’t get to. Not only is he a physical specimen when it comes to his on-field play, but he also has extremely reliable hands.

Additionally, Woods is an extremely physical player at the line of scrimmage either blocking or getting off his spot, within his routes to fight off defenders, at the catch point, and after the catch. While he’s not a super exciting yards after the catch player, he brings physicality to the field and will consistently fight for tough yards after the catch. He also brings that same physicality to blocking at the line of scrimmage. Whether that’s pass blocking or run blocking, he puts his full effort into it and utilizes his size and physicality to his advantage. His baseline for blocking at this point is a plus for him to get early playing time in the NFL.

Woods is a bit of a lumberer when he gets out of his release from a three-point stance on the line. At his size, it makes sense and he also showed the versatility in college to lineup all over the field, mitigating this issue. Additionally, he’s not an overly dynamic yards after the catch player. He gets tough, physical yards, but he won’t be a player that creates an explosive play without wide open space in front of him. While his blocking proved to be good for a rookie prospect coming out of college, he could work to improve some fundamentals to become a real force as a blocker for his teammates. Finally, he’s an inconsistent hands catcher. He showed the ability to pluck the ball out of the air and over defenders, but he let the ball come into his body a few more times than one would like to see.

The Indianapolis Colts have had a carousel of quarterbacks over the past few seasons with Jacolby Brissett, Phillip Rivers, Carson Wentz, and now Matt Ryan at the helm. Surprisingly, at the stages each player was in their career at the time playing for the Colts, Matt Ryan might be the best option that they’ve had in a long time. The Colts are a really complete team with a solid defense, good offensive line, one of the best running backs in the league, and an alpha wide receiver that went over 1,000 yards in his second NFL season. One of their glaring holes on offense is a reliable target behind Michael Pittman, whether that is a true WR2 for their team or a tight end. Matt Ryan is not shy about throwing the ball to tight ends over his career. He contributed to Pitts’ 1,000-yard season as a rookie, both of Austin Hoopers’ fantasy-relevant years where he was a top 8 tight end in points per game in 2018 and then a top 3 TE in points per game in 2019, and Tony Gonzalez’ final years in the league. So, Woods walks into a really interesting situation as there isn’t much on the roster in terms of a second receiving option, especially out of the tight end room. Mo Alie-Cox is really their only veteran option along with second-year tight end Kyle Granson. The opportunity is there for Jelani Woods right out of the gates to be an immediate contributor.

Woods was drafted to the Indianapolis Colts on Day 2, in the third round of the NFL Draft. He’s on a team with a quarterback that has not been shy about targeting his tight ends and has minimal competition in front of him to keep him off the field. And then, once he’s on the field, he has minimal competition for targets. Michael Pittman will get his targets, but after him, there is often-injured Parris Campbell, fellow rookie Alec Pierce, and then no depth after that. Woods has the opportunity in front of him to become an immediate starter and impact player. He has the size, athleticism, and physicality to translate to the NFL. In dynasty leagues, he’s great value in the third round of tight-end premium leagues. It’s hard to rely on rookie tight ends no matter what kind of situation they’re in unless their name is Kyle Pitts. So, in dynasty leagues, he’s still a stash play, and in redraft leagues, it’s best to avoid Woods and take a more reliable option.