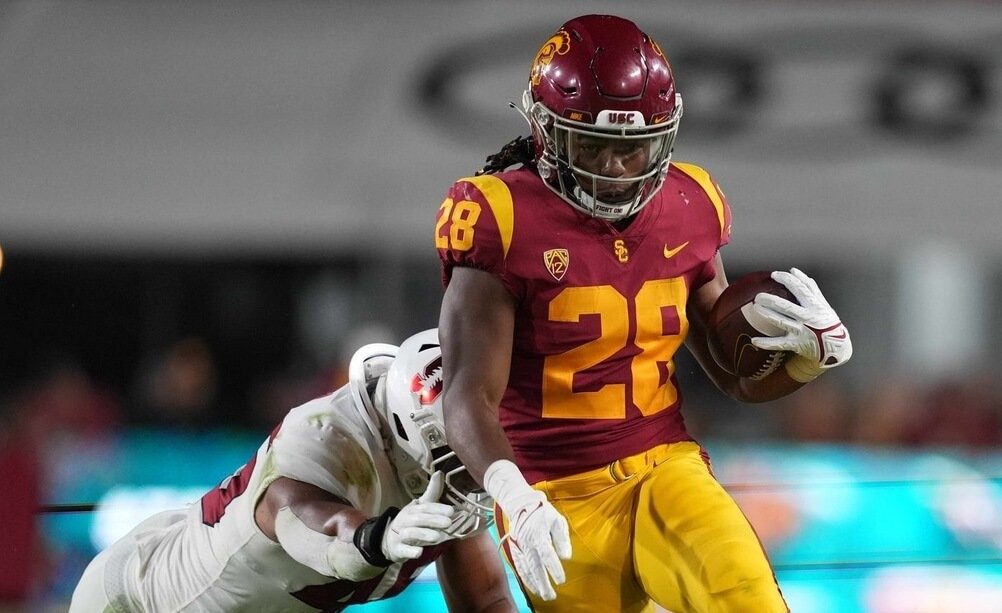 Welcome to the rookie profile for Keaontay Ingram. The RB out of Carthage, Texas spent 4 seasons in college transferring to USC for his final season after having spent 3 years with Texas in the Big 12. Ingram comes with good size and speed and led the Trojans with 1067 scrimmage yards in 2021.

Ingram was a pretty coveted national top 10 recruit signed with his local university of Texas and found immediate production with 878 scrimmage yards as a freshman.  Ingram possesses a solid frame with decent, not elite speed, and was able to pick up chunk yardage often throughout his college career right from game one.

He kicked on as a sophomore, leading the Texas Longhorns in yardage, breaking the 1,000-yard mark (1095), and upping his TD total to 10 which included 3 receiving TDs. His 58 catches in his first 2 seasons proved he could handle the reception work as well as impressively racking up an average of 5.5 yards per carry through 2 seasons.

His Junior year was one to forget for Ingram though, with the star in the making RB Bijan Robinson enrolling onto the Longhorns team. Bijan took away most of Ingram’s workload. He went on to enter the transfer portal following his Junior year after only playing 6 games as a bit-part player and seeing 53 carries.

The move to USC proved a good one and he immediately saw production. He led the team on the ground with 911 yards at a rate of 5.8 per carry. This latest season from Ingram earned him honorable mention All-Pac 12 notice despite not playing every game through a rib injury.

Keaontay Ingram possesses a strong frame with good short-area quickness when finding gaps to exploit. Ingram has a good feel for running the ball in tight windows and is decisive, while also not being afraid to be patient for the hole to open. Once he finds himself in space, he’s tough to bring down one on one with a defender. He’s shown to pick up chunk yardage regularly throughout this career and once he gets in a rhythm he’s as dangerous as any elite runner. Showed out at an early age how productive he can be in the receiving game. Pass protection has taken a step forward with every single year.

Doesn’t have the long speed to be a true home run hitter. Once he’s up to speed he finds it difficult to change direction and maintain top speed often slowing down too much and he’s caught easily. Still has work to do if he wants to be trusted as a pass blocker on the NFL field.

The Cardinals were tipped to have been interested in taking an RB early in the draft, but it never materialized and Ingram was the only RB taken in the 6th round. Immediately it was one of the best landing spots for a rookie being in a high-powered offense and very little in the way of elite talent at the position.

James Conner was re-signed to a 3 year deal following his hugely successful first season with the team in 2021 where he finished as the RB5. Chase Edmonds was allowed to leave as a free agent and the only other notable RB on the roster is Eno Benjamin who has seen little playing time in his first 2 seasons.

Just recently Darrell Williams joined the team to be the backup to Conner which hurts Ingram’s immediate path to playing time as a rookie. Williams had himself a decent season with over 1,000 scrimmage yards for the Chiefs and immediately inserts himself as the RB2 on the roster.

If Ingram can beat out Benjamin who himself was a late-round pick (round 7) then there’s a chance with an injury that he can find some playing time as a rookie. James Conner has a history of suffering injuries and has never played a full season so Ingram will hope to impress enough in preseason that he can be relied upon for some work as early as year 1.

Ingram’s day 3 draft capital will always work against him but the decent landing spot and the 3 down skillset he possesses means he could become fantasy viable if called upon. His main competition, Eno Benjamin who was picked a round later in 2020, means he has a great chance to become the RB3 in his rookie year with hopes to build on it into the future.

Ingram is that perfect upside RB that’s worth a shot really late in drafts that is one injury away from seeing the field and a good preseason could make the possibility even closer than that. Ingrams’ 89 catches in college show that he can be useful in PPR leagues if and when he sees the field. In dynasty, I like taking Ingram in the 4th round of rookie drafts and stashing him on my taxi squad.