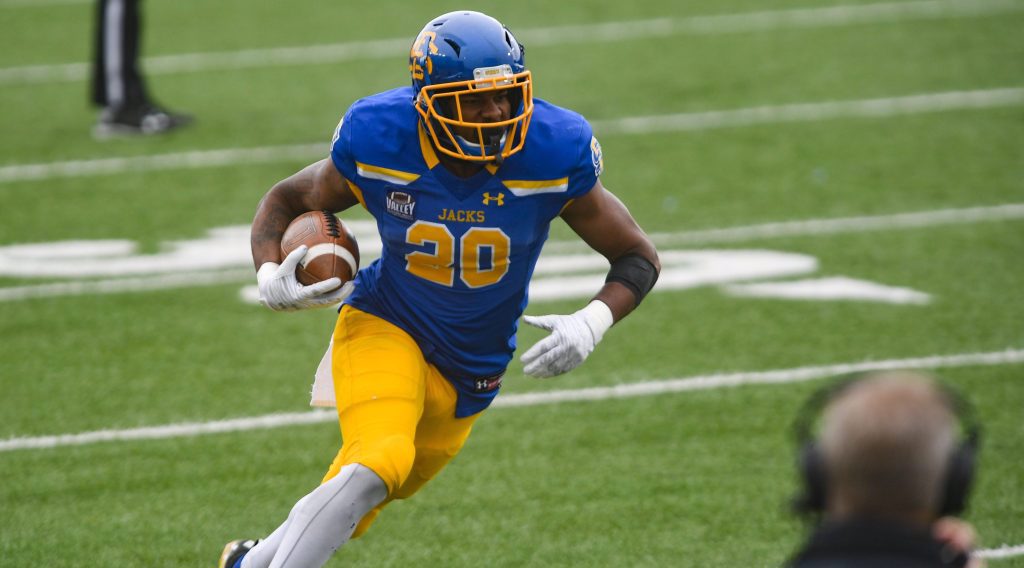 Pierre Strong has a great rookie profile, with a great story as he started out as a no-name prospect out of Arkansas, with zero recruiting stars on his 247 profile, and had just suffered an injury in his final football game of high school. He bet on himself and took his talents to South Dakota State where he flourished into an NFL prospect and a future running back for the New England Patriots.

Strong played 5A football for John L. McClellan High School in Little Rock, Arkansas, and was a force for the team. He rushed for over 2,000 yards and 30 touchdowns in his junior year. He then suffered an injury his senior year before moving to South Dakota to join the South Dakota State Jackrabbits. As a true freshman, he redshirted and did not play. But the following season, he came right out of the gates and rushed for over 1,000 yards with 11 touchdowns. He was awarded the Missouri Valley Football Conference (MVFC) Freshman of the year honors. In 2019, he followed up his impressive debut with another 1,000+ yard season in his redshirt sophomore year. That performance was good enough to earn him first-team All-MVFC honors.

2020 was a COVID-impacted season where his team only played in 7 games, but Strong was still able to accrue over 700 rushing yards and contribute 178 receiving yards on 20 catches in the passing game. Strong’s redshirt senior year was a true breakout year, even though he already had two 1,000+ rushing yard seasons under his belt. He continued to improve in the passing game, this year with 150 yards on 22 catches. But in the rushing game, he got a full workhorse workload with 240 carries for 1686 yards and 18 touchdowns. Truly an incredible season that earned him his third consecutive First-team All-MVFC honors and also earned him First-team All-American honors.

In addition to his spectacular finish to his collegiate career, he impressed at the NFL Combine as well. Strong was one of the fastest running backs at the NFL Combine with a blazing 4.37-second 40-yard dash which translated to a 113.5 speed score, 95th percentile. He also scored a 126.6 Burst Score (86th percentile), and 11.20 Agility Score (75th percentile). His Combine painted a picture of a really good athlete with the size and production to back it up.

As just mentioned in the previous section, Strong has solid NFL size at 5’11” and 207lbs to pair with his top-end athletic testing numbers. His 40-yard dash was consistently on display at South Dakota State, where he contributed a ton of explosive plays when he hit the open field. At the line of scrimmage, he shows good vision and burst with a decent ability to change direction. At times he can get a bit too ahead of himself with that speed, causing his change of direction to be lacking. On third down, Pierre Strong is a capable pass-catcher that can bring the speed he has in the running game to create explosive plays. He doesn’t just catch dump-offs, he can run simple, yet effective routes for a running back.

A fun fact that NFL coaches might be able to utilize at the next level is Strong’s contribution in the running game, receiving game, and passing game. Strong was 9/9 with 208 yards and 6 passing touchdowns during his career at South Dakota State. And while these were trick plays, he showed the ability to put the ball where it needed to be. Not necessarily a difference-making trait for a running back, but could be intriguing for his new offensive coordinator.

Watching Pierre Strong’s tape can be extremely frustrating. He has the size, the athleticism, and the tools, but his contact balance is inconsistent and his power is almost non-existent. He has the size to be able to bounce off tackles or run through arm tackles but rarely does on tape. This might stem from him being an upright runner, giving the defenders a lot of space to get ahold of Strong. Additionally, he’s lacking as a pass protector. The effort is there and he is willing, but gets blown by fairly easily and won’t hold his block for very long at all. It’s frustrating that he doesn’t play to his size.

The New England Patriots don’t quite have a need at the running back position, yet they took two running backs in this draft: Strong in the fourth and Kevin Harris in the sixth. While the Patriots don’t have a true difference-maker or workhorse, they have a lot of depth and consistent contributors. That depth includes Damien Harris, who had his best statistical season in 2021 and led the Patriots in most rushing categories, Rhamondre Stevenson, a second-year player who really started to come on at the end of 2021, and James White, a veteran presence in the backfield that has been on the team for the past eight years.

The Patriots could just be looking ahead as Damien Harris’ contract expires following this season and White is over 30 years old and can be cut with a $0 dead cap next offseason. On the flip side, there is nothing preventing the Patriots from bringing Harris back on a team-friendly deal if the opportunity arises. And both Strong and Harris were Day 3 picks that could easily be relegated to special teams or be cut if they don’t impress early. Strong has the skillset to be an explosive weapon in multiple facets of the game, but he needs to work on his strength and physicality to be effective in the NFL and earn a role in the backfield. There’s a lot in the way of Strong getting on the field early, but none of those obstacles are long-term if he performs.

Day 3 running backs are always a risky proposition, especially when there are as many obstacles in the way of immediate production as in Strong’s case. But based on Strong’s value in the dynasty community, that risk is baked into the cost of acquiring him. He’s going in the early fourth round based on Sleeper’s ADP, which is a great spot to take a shot on a player that checks as many boxes as Strong. He has the production profile, size, and athletic testing numbers, but struggles with physicality. It’s a major area of improvement to be effective at the next level, but based on where he came from and the work he’s put in to get to the NFL, he appears to have the drive to improve. In redraft leagues, it’s probably best to avoid Strong but keep an eye on him during the season in case there are any injuries or if he appears to be taking work away from any of the other main backs in the Patriot’s running back committee.