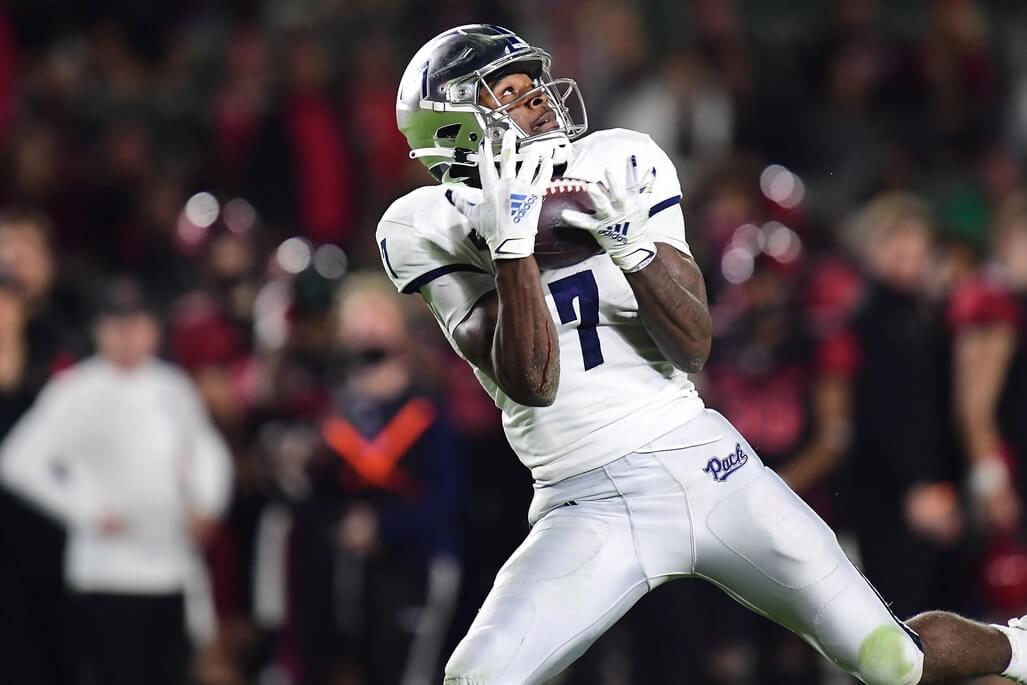 Welcome to the rookie profile for Romeo Doubs. Doubs improved his production in each of his 4 years in college with Nevada and earned plenty of accolades along the way. Last season Doubs recorded 1,109 receiving yards in 11 games, catching 11 TDs, and was the clear alpha target in the Wolf Pack’s offense.

Despite being an uber-athletic prospect, Doubs fell under the radar and went unranked as a recruit. This was surprising given how truly dominant Doubs was at Jefferson High School doing it all: running the ball, catching the ball, and even recording 18 career interceptions as a defender. Then having received 5 power five school scholarships, he chose Nevada, a college that recruited him hard and ultimately won the battle.

With his very first touch for the Wolf Pack, Doubs returned a punt 80 yards to the house, it was the beginning of a successful freshman season recording 562 yards from 43 receptions.  2019 saw Carson Strong enter the lineup at QB and the two formed a great connection with Doubs forming that vertical threat for the Wolf Pack. He upped his receiving share to over 20% and earned All-Mountain West honorable recognition as well as the team’s most valuable player.

In his Junior year, he saw a large leap forward topping the 1,000-yard receiving mark in just 9 games and impressively increasing his receiving share to 35%. His TDs went up to 9 and he was a finalist for the Biletnikoff Award given for being the best receiver in the league. Once again increasing his output in his final college season, Doubs topped the 1,100-yard mark and recorded his best season for TD catches with 11. His 80 catches in his final year set him up for a good shot at being drafted in the middle rounds of the 2022 NFL Draft.

Fits the right measurables in terms of size, speed, and weight. Genuine vertical threat who tracks the ball well through the air and times receptions nicely. This allows him to win contested catches at a rate higher than most. Displays strong hands at the point of catch and has a big catchable range. Has produced back-to-back 1,000-yard seasons being a high-volume target in the offense. Worked on being more explosive over time and now adds to his overall upside at the next level.

Not the most refined route-runner which limits his current effectiveness when thinking about transitioning into the NFL. This weakness may hinder his ability to release and break away from defenders. Much slower when trying to run laterally compared to running deep in a straight line. On film, he showed some concentration drops at key times, something he will have to clean up.

One of the best landing spots for the incoming rookie class. The Green Bay Packers, who lost star Davante Adams to the Las Vegas Raiders, drafted 3 WRs in the 2022 NFL Draft. Doubs was the 2nd of those picks and their 4th overall selection.

There is certainly a huge hole to fill with the Green Bay Packers with 244 vacated WR targets, are right towards the top of the NFL when it comes to potential opportunities for rookies. Last season’s MVP Aaron Rodgers is still playing at a phenomenally high level well into his late thirties and is likely to spread the ball around rather than filter through one main target in 2022.

The current depth chart lacks real quality with Allen Lazard, Randall Cobb & Sammy Watkins leading the way before the incoming rookies. There’s a huge opening for the rookie WRs and immediate opportunities if they can hit the ground running in training camp and preseason.

Romeo Doubs was hugely productive in college at Nevada and although he may have hoped for better than day 3 draft capital, the landing spot couldn’t have been much better. With two of the teams’ long-time leading WRs leaving in the offseason in Davante Adams and Marquez Valdes-Scantling, the opportunities are potentially big for Doubs.

The question being asked is whether Aaron Rodgers is going to trust the incoming rookies with big workloads early on. The answer is usually a resounding “no” but, this time without an elite go-to WR the offense is going to look drastically different. Any 4th-round rookie pick cannot be counted on for immediate production but someone with his skill set and production, he’s worth the shot late in dynasty rookie drafts and redraft formats.