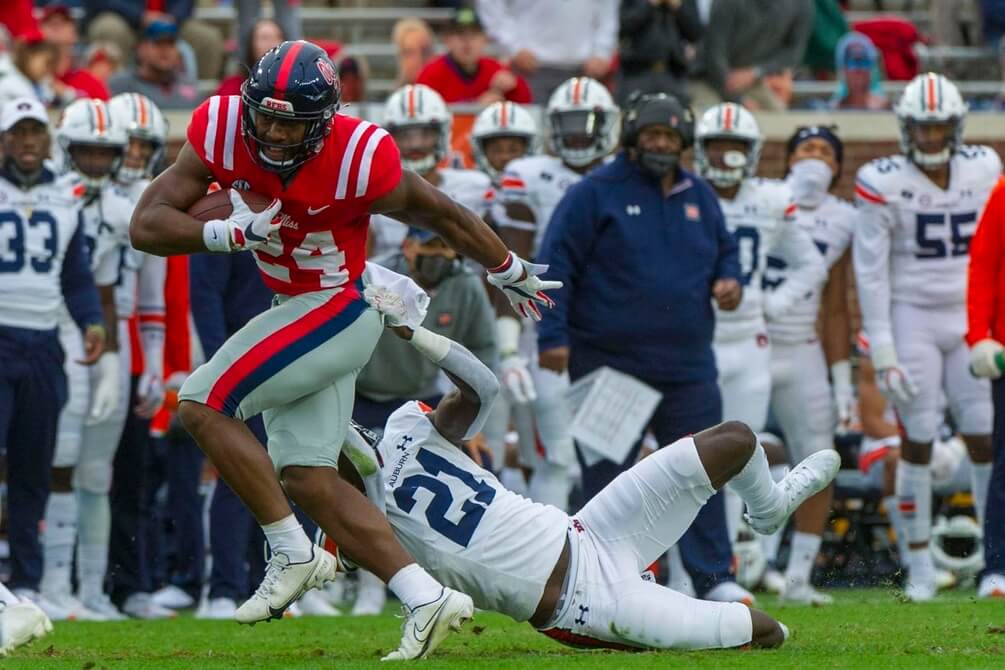 Welcome to the rookie profile for Snoop Conner. Despite sounding more like a rapper and only officially starting 2 games for Ole Miss, Conner has a real nose for the end zone rushing for 26 TDs in 3 seasons and vaulting his way to mid-round draft capital.

Coming out of High School, Conner was a 3-star prospect being a do-it-all type of guy and having successful spells at QB throwing for 4,879 yards as well as rushing for 3,465 and a whopping 112 total TDs. He led the Hattiesburg Tigers to their first state title game in 19 years.

Conner then worked on purely being a running back, bulking up and adding power to his then skinnier frame. And despite then going on to be mostly a supporting RB rather than a starter, he still ran in the third most rushing TDs in Ole Miss’ history with 26.

As a freshman, Conner started appeared in 12 games rushing the ball for 512 yards off 81 carries. Good enough for an impressive 6.3 yards per carry and scoring 5 times. He was used in rotation with 2 other RBs and this ended up setting the tone for Conner’s career… Productive when called upon but never given a full workload.

Conner’s second season as a sophomore was very much the same, used as a change of pace guy to support Jerrion Ealy but being just as productive running in 8 TDs on just 93 attempts. He started just one game but in that game, he managed to rush for 75 yards on 13 carries.

In his final season in college, he again started just 1 time but became a TD machine rushing in 13 TDs from 130 carries, only 3 attempts short of Jerrion Ealy’s number of 133. Conner notably had a huge game against Arkansas rushing for 110 yards on 12 carries and recording a career-high 3 TDs in the game.

He enters the NFL Draft being projected to be a 5-6 Round selection via Lance Zierlein who comps him to Minnesota Vikings running back Alexander Mattison.

Good, typical size for an NFL back at 5’10 222 Lbs. A versatile runner who would fit in a number of schemes which helps his draft stock but also helps him fit seamlessly into a RB committee. Has a clear nose for the end zone and runs violently towards the goal line and knows what he has to do to get there. Gives it his all in pass protection and isn’t afraid to violently confront the blitzer.

Rarely been a starter in college which doesn’t stand him in good stead for being an NFL-ready back. In space, he could be more dynamic and often makes poor choices. May not have the speed or elusiveness to evade NFL linebackers at the second level. Top-end speed is lacking and can get caught from behind especially when thinking about the next level.

There is a clear early path to touches in this offense if the two current top RBs on the roster are not fully ready to go. Undrafted star James Robinson and 2021 1st round rookie Travis Etienne both suffered season-ending injuries last season. Robinson suffered his torn Achilles injury late in the year (December) so it is very likely he will miss time to start the season. Etienne has yet to see a snap in the NFL and is coming into the season just as much of a rookie as Snoop Conner is.

If Robinson does indeed miss time then Etienne will have to take on a large workload and they might want to lighten the burden on him (coming off that Lisfranc injury) by giving Conner some work in a supporting role which could include goal-line duties. If Conner does indeed see some time and impresses, then there’s no reason why he can’t continue to have a meaningful role even when Robinson is back with the team. They have shown in the past that draft capital doesn’t matter if you perform well in this role.

There aren’t many Round 5 rookie RBs that have hit in the NFL, period. Conner faces an uphill battle but has faced it already throughout his career, sharing the limelight with others but still being incredibly productive in limited opportunities.

There aren’t many 5th Round rookies that can say they have a path to immediate touches either. Conner now has his chance to impress on a team that should look significantly better offensively than it did in 2021. Under new incoming head coach Doug Pederson, Trevor Lawrence can take the next step and with that step, should bring more scoring opportunities for a team that scored the second-fewest TDs with just 28. Conner is well worth a late-round pick in Rookie drafts and for redraft you could do worse late in the draft than drafting a guy whose path to immediate touches is possibly only a reinjury away from a sizeable workload.