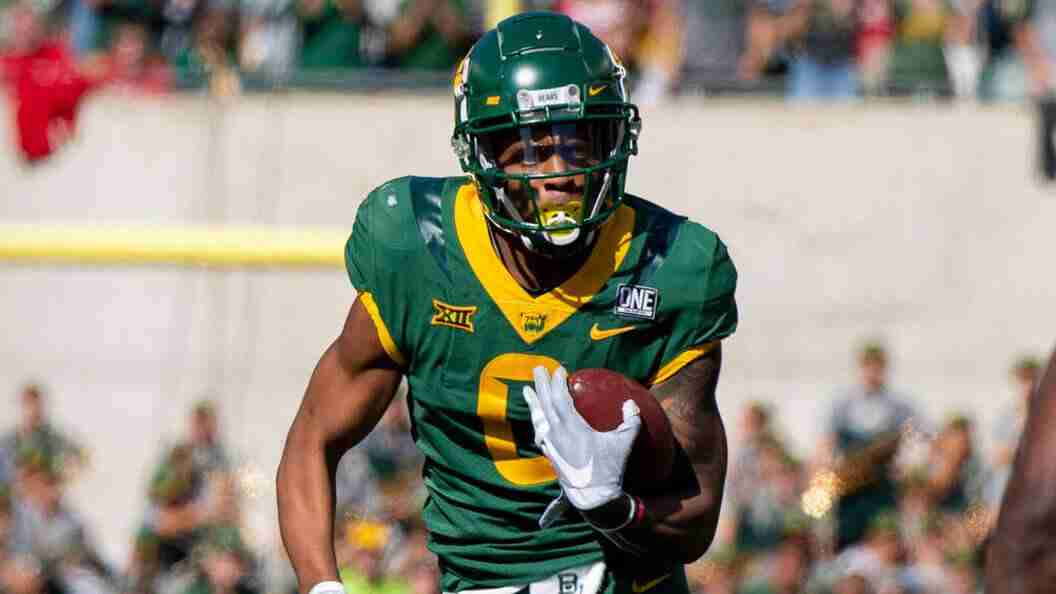 Welcome to the rookie profile for Tyquan Thornton, the speedster out of Baylor who has become an interesting prospect due to his landing spot in New England.

Thornton was a four-star recruit out of high school, who also flourished as a track athlete with a personal best of 10.5 seconds in the 100 meters.  He was a solid contributor all throughout his college career, starting from the 2018 season all the way through 2022.  He was an honorable mention All-Big 12 selection in 2019, leading the Bears with 782 receiving yards and 5 touchdowns.  He was also a second-team all-conference pick in 2021.  Thornton flourished on kick returns too, which shows up within his scouting report.

The first thing you notice when scouting Thornton is his athleticism.  He ran a 4.28 40-yard dash at the 2022 scouting combine, which is something that shows up throughout his tape.  Thornton actually briefly broke John Ross’ combine record with a 4.21 clocked, but this was later corrected, so unfortunately we can’t claim him as the fastest WR in NFL history.  This is also the case with his elite jumping numbers, which highlights his ability as an athlete.  During college, Thornton thrived as the deep ball specialist, especially while New York Jets receiver Denzel Mims was still on the team.

Thornton’s sprinting background shows not only in his long speed but also in his release package.  Thornton is able to accelerate through his release and shows a quick area burst which is something that could easily be moldable into a higher-level receiver.  This play speed leads to easy separation in the underneath game.  Whilst not the most accomplished of route runners, Thornton simply plays the game at a different speed to everyone else in college.  This leads to separation on all levels of the route throughout his tape.

Thornton has a sprinters frame, which lends to his elite speed, but means he stands out as the skinniest player on the field.  This makes sense, given his 180lb weight compared to his 6’3 frame.  It seems he’s likely to remain at that size too, which means that physical cornerbacks will be able to eliminate him from the field with relative ease if they can get their hands on him.  Whilst Thornton’s athleticism was clear to see in college, he may struggle in the NFL once the playing field starts to level out with other elite athletes at all positions.  It’s also worth noting that Thornton’s 8 ¼-inch hands are extremely small, which can be seen with some struggles through contact.  Thornton is a clear role player – one who has elite positives, but clear negatives to his game alongside this.

No one in the NFL draft or the fantasy community expected Thornton to be drafted this high.  Whilst outlets such as Bootleg Football were relatively high on Thornton, it was a surprise to hear his name called on day two of the NFL draft – let alone in the second round as the tenth wide receiver to be taken.  We all know that Bill Belichick marches to the beat of his own drum, and this was particularly the case with a selection that no one in the media could have predicted.

Thornton seems to have now fallen into the category of prospects whose dynasty ADP sees them get punished for being overdrafted in real life (think the slide of Kararius Toney last year).  But it’s hard to not see this as an intriguing landing spot for Thornton.

Thornton is an interesting prospect with his current late 3rd/early 4th-round rookie draft ADP.  His draft capital means that he has an easier path to success.  So does the Patriots’ depth chart at wide receiver, with other role players like Devante Parker, Jakobi Meyers, Kendrick Bourne, and Nelson Agholor, but no clear alpha establishing themselves.  However, despite a clear opportunity, the Patriots are likely to be a run-first offense going forwards.  Mac Jones was 14th in passing attempts, finishing behind a few quarterbacks who only played 16 games.  Bill Belichick has shown a willingness to lean into the strengths of his team, which are clearly the run game.  Thornton could be interesting in dynasty, and definitely best ball formats, but he’s a receiver I’m not expecting any redraft value from unless something changes.