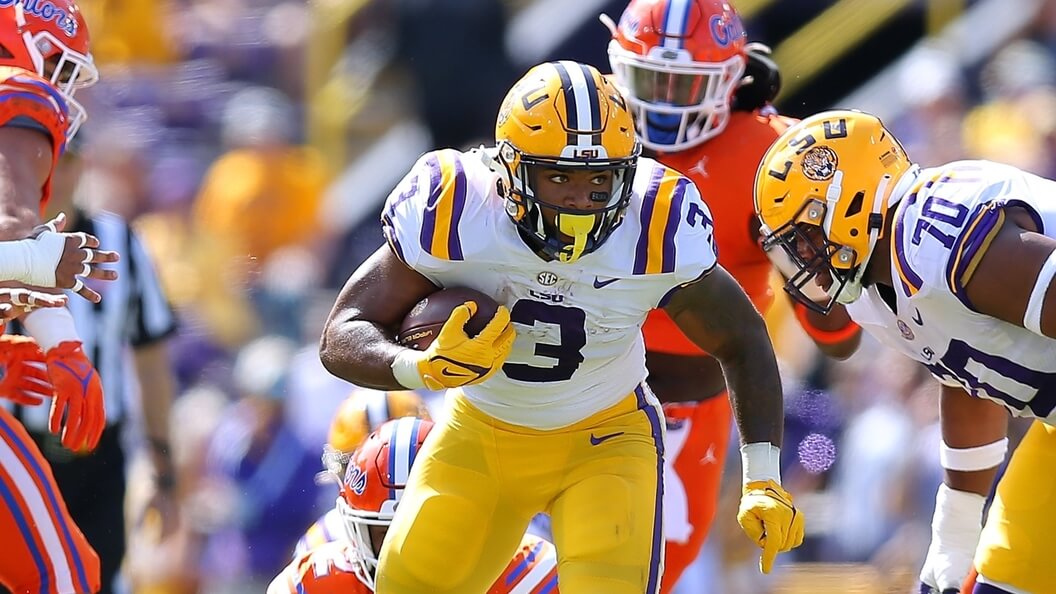 Welcome to the rookie profile for Tyrion Davis-Price. A surprising 3rd round pick for many in the 2022 NFL Draft, heading to the San Francisco 49ers. He has a rare combination of size and athletic ability and broke the 1,000-yard rushing mark in his final season at LSU.

Coming out of high school, the 4-star recruit Davis-Price was a bruising 226 pound downhill running back ranked as No.8 back in the nation by 247Sports. Davis-Price a finalist for the Warren Dunn in 2019 as the top high school player in the Baton Rouge area opted for his local university of LSU in an easy decision for him.

In his first season for the Tigers, he was the backup to Clyde Edwards-Helaire rushing just 64 times in 14 games, sharing the workload with John Emery Jr and Chris Curry. Rushing for 4.6 yards per carry was a solid start for Davis-Price who also handled 10 receptions for 74 yards along with his 6 rushing TDs.

Davis-Price stepped up to be the leading rusher on the ground in his sophomore season, featuring in 9 games and producing 446 yards on the ground and 3 TDs. He had 2 standout games breaking the 100-yard mark against South Carolina and Arkansas.

2021 his junior season was his true breakout year, performing as one of the best RBs in the SEC and breaking the 1,000-yard mark on the ground. Davis-Price had 4 100-yard games and set the franchise record of 287 yards rushing in a remarkable performance against Florida where he ran in 3 TDs on 36 carries! This feat unsurprisingly earned him the Walter Camp National Offensive Player of the week award and really put his name up in the lights for NFL scouts.

A physical, downhill runner who always seems to find positive yardage by falling forwards with his momentum. Very balanced runner between the tackles driving his legs, rarely getting knocked off balance. Fast enough to produce chunk yardage in space when beating defenders to the outside. Improved as the season went on producing big numbers in the SEC conference giving him a solid pedigree. Give him more and more volume and he improves with each carry by building up momentum.

Ball security has never been great and will need to be cleared up if he’s to be a reliable NFL back. Often is not patient enough to wait for the gap to develop and instead runs straight into the defender or his own lineman. Has shown the ability to catch the ball but not on a regular basis, his hands can be suspect.

One of the most productive backfields in the entire NFL, the San Francisco 49ers have added multiple RBs in the past 2 draft classes. Head coach Kyle Shanahan has proved time and time before that draft capital means very little when it comes to his running back room with 2021 rookie Elijah Mitchell (Round 6) being the standout on the team last season.

Davis-Price comes in heavier than the RBs they have on the current roster so his usage might be situational, but a solid training camp and preseason can lead to opportunities! There is always the risk of injury to Elijah Mitchell and Jeff Wilson who both missed time in 2021. Plus Trey Sermon is an afterthought following his disappointing showing last offseason.

Elijah Mitchell turned into somewhat of a workhorse last season with almost three times the rushing usage of the next runner in Jeff Wilson. This has not been the norm for Shanahan, who often likes to rush by committee and this draft pick could signal the return of a 2 or 3-way committee with a combination of Mitchell, Wilson, Sermon & Davis-Price mixing in.

Any day 2 RB has to be taken seriously and especially one that lands on one of the best rushing teams in the NFL. If you drafted or picked up Elijah Mitchell last season, you found the proverbial diamond in the rough who is now spoken about in the same sentence as Ezekial Elliott or a James Conner in terms of value.

The difficulty with this offense has always been trying to start the right guys who are going to pop off on any given week. With Elijah Mitchell seemingly back for his lead role this season, it has become slightly clearer that the other 3 guys are competing for the support role. But Davis-Price’s size is an interesting component to the puzzle. Could he naturally be given the goal-line work? Can his skill-set align perfectly with what Kyle Shanahan is trying to do with his dynamic offense and force his way to RB2 or beyond? All possibilities are open with the 49ers.

This offense can lead to fantasy gold if you can select the right guy and Davis-Price’s cost is well worth the investment for where he’s being drafted.