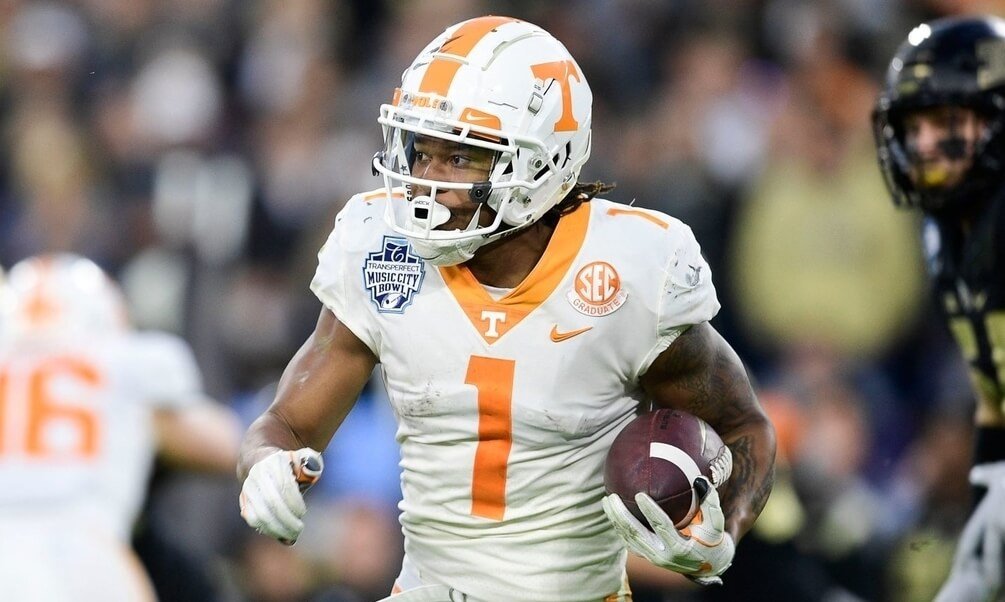 Welcome to the rookie profile for Velus Jones Jr. One of the most captivating rookies to come out in some time. Velus Jones Jr spent 6 seasons in college before declaring for the NFL draft. In college, most of his production via special teams as an electric returner.

Velus Jones Jr earned first-team all-state honors as a junior & senior during his time with Saraland High School. He was a 4-star recruit In 2016 earning him a move to USC where he would play his first 4 seasons in college.

In his first season at USC Velus Jones redshirted his freshman year. He made his debut in 2017 and was featured in all 14 games as USC’s main kick returner and backup wide receiver. Although he didn’t see much playing time as a receiver, only catching 6 passes for 46 yards, he was productive in the return game averaging 24.5 yards per return.

He made the step up in 2018, seeing significantly more time as an actual wide receiver where he caught 24 passes for 266 yards and a score. He also continued to impress in the return game where he returned 21 kickoff returns for 483 yards at an average of 23 yards per return.

Frustratingly for Jones, he was used almost solely as a return guy in 2019, earning second-team All-Pac 12 honors as a return specialist. His 704 return yards at an average of 24.3 was 14th ranked nationally and included huge performances against Fresno State where he took a return the full 100 yards finishing with 161 total yards in the game.

Transferring to Tennessee in 2020, he made an immediate impact with the Volunteers and was used in both the returning and the receiving game. Jones recorded 280 receiving yards and 3 TDs which was 2nd on the team and the most in his career. His big breakout game came against Vanderbilt which saw him catch 7 passes for 125 yards and 2 TDs for a career-high day. He wasn’t just a WR though, he continued his usage in the return game where he returned 18 kickoffs for 398 yards which led the SEC as well as being 2nd in kickoff return average of 22.11.

In Velus Jones Jr’s sixth and final season in college, he was finally used more as a receiver than a returner and earned the accolade of being the only player in the country with 800+ receiving yards, 200+ punt yards, and 600+ return yards. Impressively, despite being used so little as a receiver throughout this college career, he recorded three 100-yard performances, and his total of 1,722 all-purpose yards ranked him third in the SEC.

Came on leaps and bounds as a productive WR in his final year of college. An absolute YAC (Yards After Catch) monster. Can line up inside or outside showing his versatility. Plays strong bursting through tackles and isn’t afraid to encourage contact, and fights for extra yardage. Can be a special team ace in the NFL seeing the field from day 1.

He’s one of the oldest rookies to come through to the NFL. Still, early days as a receiver and will need to define his route running in the NFL having run only basic routes in college. He has a below-average wingspan which can cause problems at the next level if he cannot break off routes successfully enough to earn separation.

The Chicago Bears had a glaring need at Wide Receiver entering the NFL Draft following veteran Allen Robinson leaving in Free Agency. They didn’t pull the trigger until their 3rd pick and their only pick in Round 3. Velus Jones Jr was a surprise to many analysts to be selected that high but there was a huge run on WRs as early as the middle of Round 1 and then were taken off the board consistently throughout Round 2 and 3.

Velus Jones Jr now has a fantastic opportunity to see the field Day 1 not only as a return guy but as a wide receiver playing opposite the impressive Darnell Mooney who recorded his first 1,000-yard season in 2021. Right now there really isn’t a lot of quality competition either. Mooney & Tight End Cole Kmet will continue to ascend in this offense as key targets for Year 2 QB Justin Fields but outside of those, it’s new signings Byron Pringle & Equanimeous St. Brown who look likely to be Velus Jones’ rivals for targets.

Any rookie potentially stepping into day 1 production is certainly interesting. The fact that Velus Jones has a lot of untapped potential too is something that can’t be measured. An electric playmaker with the ball in his hands, Jones could see a ton of short targets and being asked to produce after the catch similar to what we saw Jaylen Waddle do last year in his rookie season (although clearly not to the same sheer volume).

Certainly has an element of risk involved with taking a guy who’s seen more special teams work than actual offensive snaps, but the draft cost is so low it could well be worth the gamble. The situation is worth monitoring in training camp and preseason to see exactly how Velus Jones is going to be used for the Bears.

The encouraging thing for Velus Jones owners is that being an early 3rd round selection means they are pretty heavily convinced that he can be a weapon in this offense as early as year 1. The lack of movement towards a big named free agent WR also means they are currently happy with what they have. He was reportedly one of the names on a list drawn up by QB Justin Fields of WRs he would be happy throwing to this coming season, it might not mean a lot but it means something. If the QB is a fan of him he may look his way more often than not.

The team is now built for speed and if Mooney, Jones & Pringle are all playing well and flying around the field then they can be a lethal combination for any defense.