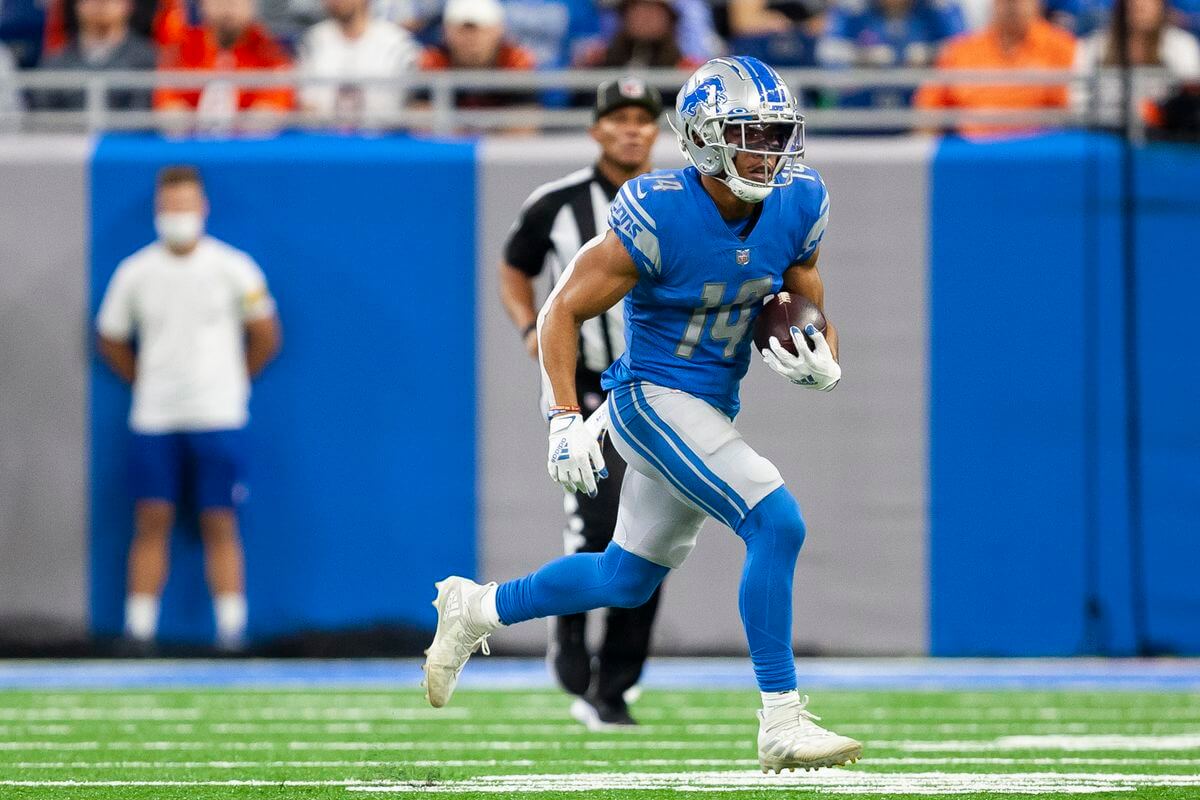 The Rise of Amon-Ra St. Brown

Through the first three games of the 2022 season, one thing is certain we are witnessing the rise of Detroit Lions WR, Amon-Ra St. Brown. For the first half of his rookie season, St. Brown appeared to be like most rookie receivers, inconsistent at best. This should have come as no surprise to Lions fans as he was drafted with the 7th pick of the 4th round of the 2021 NFL Draft, 112th overall.

So, when St. Brown got off to a slow start in week one of the 2021 season hauling in 2 catches for 23 yards most figured he was a wasted day three pick. The 21-year-old rookie out of USC followed that up with 3 catches for 18 yards and 1 catch for 2 yards over the next two games against the Packers and Ravens.

Lion’s fans were quickly losing faith in management and assumed the pick was “Same Old Lions”.

Then, in true rookie form, St. Brown vanished just as quickly as he appeared hauling in 5 catches or fewer from weeks 7 to 12. From week 13 on the injury bug would bite the Lions and St. Brown would get his chance. D’Andre Swift missed 4 games and played less than 50% of snaps in the remaining three.

Add in the loss of TJ Hockenson who was injured in week 14 and was shut down for the season and St. Brown would see an opportunity to be Detroit’s only viable weapon for the final 6 games of the season.

This 6-week stretch is where The Son God started to shine. Over the final 6 games of 2021, St. Brown saw 10 targets or more in every game and recorded at least 8 catches in each, he also racked up a minimum of 73 yards in all 6.

St. Brown had truly arrived when there was no target competition left to hold him down. The question was, what would happen to him once the Lions got healthy in 2022?

The offseason didn’t start off well for Amon-Ra. The NFL draft saw the Lions use a first-round pick on injured star receiver, Jameson Williams, out of Alabama, combine that with a healthy Hockenson and Swift, and the second-year star was all but guaranteed to see regression from his late seen unsustainable breakout.

The 2022 season kicked off with the entire Lions offense healthy except for Williams who was placed on the non-football injury list due to an ACL injury suffered in the national championship game.

The Lions week one opponent was the Philadelphia Eagles, a locked and loaded title contender. In week one despite the skepticism of many St. Brown erupted for 8 catches and 64 yards with one touchdown. The breakout star had proven to everyone that he was more than just a flash-in-the-pan injury replacement, St. Brown was primed for superstardom.

Amon-Ra followed up his stellar week one with a career game racking up 9 catches, good for 116 yards and 2 touchdowns, and then 6 catches and 73 yards in week three against the Minnesota Vikings.

The Star of the Future

Through three weeks of the 2022 season, it’s easy to see that the Lion’s rebuild is right on schedule and that St. Brown is a surefire centerpiece for that rebuild.

Combine St. Brown with budding stars Swift and Hockenson and add in one final offensive piece in Jameson Williams when he gets healthy and this will be an offense to fear, currently ranked third in the NFL in scoring.

If the Lions can find a way to rebuild this porous defense through the draft, they could be on the brink of being a legit contender for the first time in ages. I trust Dan Campbell and this front office and so should you, this team may fall short of the playoffs in 2022 but they are closer to the top of the league than they are the bottom.