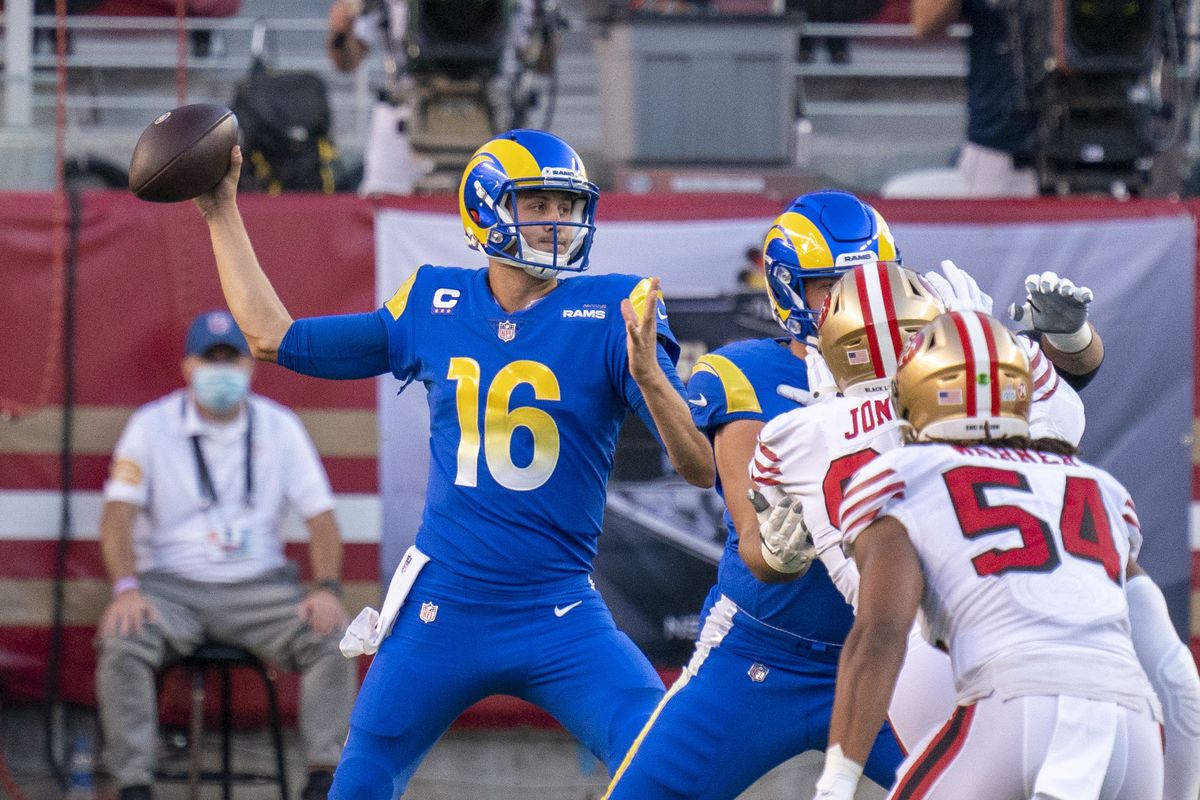 With waiver candidates finding their new homes this morning, I’m back in my weekly spot, checking in with my top fantasy football streamers for Week 10. This week, my free agency deep dive will include favorites (my locks) and honorable mentions (more risk, or reliant on an injury update). For certain positions, I’ll even list some possible streamer options that I recommend avoiding.

Disclaimer: As always, I will try and look past the most obvious waiver candidates, targeting Week 10 Streamers that are available in less than 40 percent of all ESPN leagues. My selections will be based on their matchups, recent play, and upside potential in deeper PPR formats. I recommend checking weather and injury/Covid updates for each streamer in the days leading up to each game.

I’m very happy to say that we shook off that rough Week 8 peformance at the quarterback position with a money Week 9. Hitting on three of three streamer suggestions (Lock, Cousins, Luton).

I expect that Tua Tagovailoa will be a hot waiver commodity, and possibly even Drew Lock who has another nice matchup against the Raiders this week. I recommend either Tua or Drew as a streamer if they’re still available in your league, but if not here are my Week 10 selections.

Cheating just a hair here with Goff rostered in just over 40 percent of leagues. But he’s probably the best bet on the streamer market this week if he’s still available.

Goff has only had three 20-plus fantasy performances in 2020, but the issue for the Rams QB has always been how he plays under pressure. The Seahawks are in the bottom half of the league in both quarterback pressure rate and hurry percentage. They also have the worst-ranked secondary against the position in fantasy. It also helps that this game is at home where Goff is generally much more comfortable.

I mentioned Lock as a waiver candidate above, but his roster percentage still leaves that up for debate compared to Tagovailoa. DOUBLE DOWN. Lock was my top QB streamer in Week 9 and he threw for 313 yards and ran for 47, with three total touchdowns. I like him just as much on the road against Vegas.

In the ultimate comeback story, Smith is now an NFL starting quarterback again in Washington. This offensive line is terrible, but luckily they’ll face a Lions defense that has the fifth-worst pressure rate in football. *Watch the rainy weather forecast in Detroit.

Mayfield has a great matchup against a Texans defense that was picked apart by sixth-round rookie Jake Luton. The issue is that he hasn’t practiced in a decent amount of time, being that he ended up on the close-contact Covid list.

If Baker can get himself prepared in time, this could be a slam dunk of an opponent. I am a little concerned that the Browns run game dominates all fantasy statistics, because of a rainy weather forecast in Cleveland.

Teddy Bridgewater (CAR v TB) – One of my favorite streamers all season, but I hate this spot against a really good Bucs defense that just got embarrassed by Drew Brees.

Jake Luton (JAX @GB) – For anyone thinking of waivering Luton off his performance in Week 9, keep in mind that the Texans D is one of the worst in football. Luton will have a much tougher go in Green Bay against a strong Packers pass rush and savvy corners like Jaire Alexander. I actually listed Luton as an HM streamer last week, but now is no time to get cute.

As many hits as I had on QB in Week 9, I missed on RB. To be fair, my two main streamer candidates had injury designations pop up mid-week after I put my faith in them (Matt Breida and Troymaine Pope). Pope is still an interesting name to watch this week, as Justin Jackson picked up an injury in Week 9. Still, with Kalen Ballage and Joshua Kelley also in the mix, the Chargers backfield may be a wait and see situation right now. Breida however is a MUST-STREAM again if he can get healthy before Sunday. Gallman was my only “hit” at running back last week, but Freeman should be back against the Eagles.

Top Week 10 waiver candidates for RB can be found in my colleague Rich King’s weekly waiver wire report. Duke Johnson Jr. and Tevin Coleman are some of the bigger names on the list. Here are some alternative streamers.

Despite a tougher matchup against the 5th best run defense in the NFL, Burkhead has proven that he should be rostered. This offense is going to run the ball a lot, with Damien Harris as the early power back and James White as the pass-catcher. You might wonder, well where does Rex fit in? Pretty much everywhere else. The hybrid back who has outplayed both Harris and White in their respective roles at times.

James Robinson is THE GUY in Jacksonville, but I actually love this matchup for Thompson too. Luton may be playing from behind for a good portion of this game. He’ll also likely be under fire, looking to dump the ball to his running backs. In PPR leagues, Thompson might get you an 8-10 point stream this week, which is plenty if you’re desperate at running back.

Thursday night option so act quickly if interested. Wilkins has outperformed Jonathan Taylor on the ground most games, and the Titans aren’t great against the run. If Taylor continues to struggle, this might be a game to stream Wilkins.

Washington was acquired by Miami after Gaskins’ injury, but he was unable to play in Week 9. If Breida misses another week of action, Washington may immediately surpass Patrick Laird and Jordan Howard, who were outperformed by rookie Salvon Ahmed against the Cardinals. I would also choose Washington over Ahmed in this situation, being that they traded draft capital to bring him in.

Ladies and gentlemen, we hit BIG at wide receiver in Week 9. Danny Amendola (7 for 77), David Moore (4 for 71, plus a TD), Jakobi Meyers (12 for 169), Darnell Mooney (5 for 43, 11 targets). The only miss was Randall Cobb, who was overshadowed by Fuller and Cooks. Let’s try and rekindle that magic in Week 10, and boy are there some juicy options to choose from.

DOUBLING DOWN on possibly the most underrated rookie this season, Darnell Mooney. The deep ball threat never seems to put up a dud, as he has become fully ingrained in this Bears offense. The Minnesota secondary is perfectly susceptible to a WR3 like Mooney too. They have horrible corners, and the safety double team will flock to Allen Robinson, not the rookie. I also like Anthony Miller (14.4%) this week in PPR leagues, but Mooney has the much higher BOOM potential.

There’s no one in this Raiders secondary that can cover the 6’4″ Patrick, especially with Jerry Jeudy garnering a ton of attention of his own. The Broncos wide receiver had two straight 100 yard games earlier in the season, but he’s cooled off a bit since. He’s still a redzone target either way, and Drew Lock has caught fire. Honorable mention to teammate KJ Hamler (2.6%). The rookie slot receiver has developed a connection with Lock in recent weeks, but I like the size matchup for Patrick better if I’m choosing between the two.

Here I am right back on the horse with Cobb. He didn’t produce tremendous numbers last week, but it was mainly because the Jags couldn’t guard anyone. Cleveland is slightly more competent in the secondary with Denzel Ward leading the way, but they still aren’t great (28th against WR’s). Cobb may really clean up here in the slot, with Ward’s focus on Cooks or Fuller.

Reynolds has let me down before, but this Seahawks secondary should get torched yet again as they play the Rams in LA. Woods and Kupp will demand top coverage, leaving Reynolds to bully the Seattle CB3. His best statline was in Week 7 against the Bears, with 52 yards and a touchdown off eight targets.

Really more of a waiver target than a Week 10 streamer, but Reagor deserves a look either way. The Giants have played well defensively, but all the rookie needs is one blown coverage to catch New York deep.

Against a sub-par Titans secondary, either Pittman or Pascal could be looked at as decent PPR streams. The rookie definitely has the higher ceiling, but Pascal has the better track record. In the end, the two may just split targets and devalue one another in fantasy.

I would avoid this last one, but it’s worth mentioning that James went nine for 184 with a TD on 13 targets in Week 9. With Aiyuk, Bourne and Deebo most likely all returning though, James will go back to being a reserve option.

The tight end position continues to be a touchdown toss-up for streamers. If you’re looking to ride the hot hand, waiver candidates Dallas Goedert (PHI), Irv Smith Jr. (MIN) and Austin Hooper (CLE) may top your Week 10 lists. I like all three if you can get them, especially Goedert and Smith, but here are some less popular streamer options.

Alie-Cox was a player who found his way on this list earlier in the season, and probably some waiver wire lists too. He was Rivers favorite target before an injury, and now he could be in line to return with Jack Doyle likely sidelined. It’s a Thursday night game, so we should know Alie-Cox’s status by tomorrow afternoon or Thursday latest. When healthy, the Colts tight end has his quarterback’s eye, and a large frame in the red zone.

It’s still sort of a guessing game between Jordan Reed and Dwelley week to week, but as the lesser-known talent, Dwelley capitalized in Week 9. Nick Mullens isn’t going to throw the ball downfield too often, so that works to Dwelley’s game in a PPR format.

As my number one tight end streamer last week, Akins didn’t exactly light up the charts for me. Sometimes you got to stick with your gut though, and with a full week of practice I’m DOUBLING DOWN on Akins as a deep dive option if you need it in Week 10 against a poor Browns secondary.

With the Giants and Eagles now above the 40 percent threshold, that doesn’t leave too many streamer options at D/ST, but there are a couple I like.

This Saints D has underperformed most of the season, but we all saw what they can do if they put their mind to it on Sunday night versus the Bucs. Nick Mullens and the Niners are a much easier Week 10 opponent. Assuming NOLA doesn’t overlook this offense, they should have no problem shutting it down by taking away the San Francisco run game.

This roster percentage is a joke. I’m a Jets fan and I admit that Miami has been a top defense almost every week, no matter the opponent. They force turnovers, score touchdowns, and even shut teams out entirely (Jets with Flacco, but it still happened). Brian Flores has this team on the move, and I don’t care if it’s against Justin Herbert and a solid Chargers unit, the Fins D should be rostered in 65 percent of leagues at least.

Minnesota Vikings (@CHI) – The Bears offense may be playing pathetically bad in recent weeks, but this Vikings defense is still a shell of what it once was. In Chicago, I’m not touching this D/ST in Week 10.