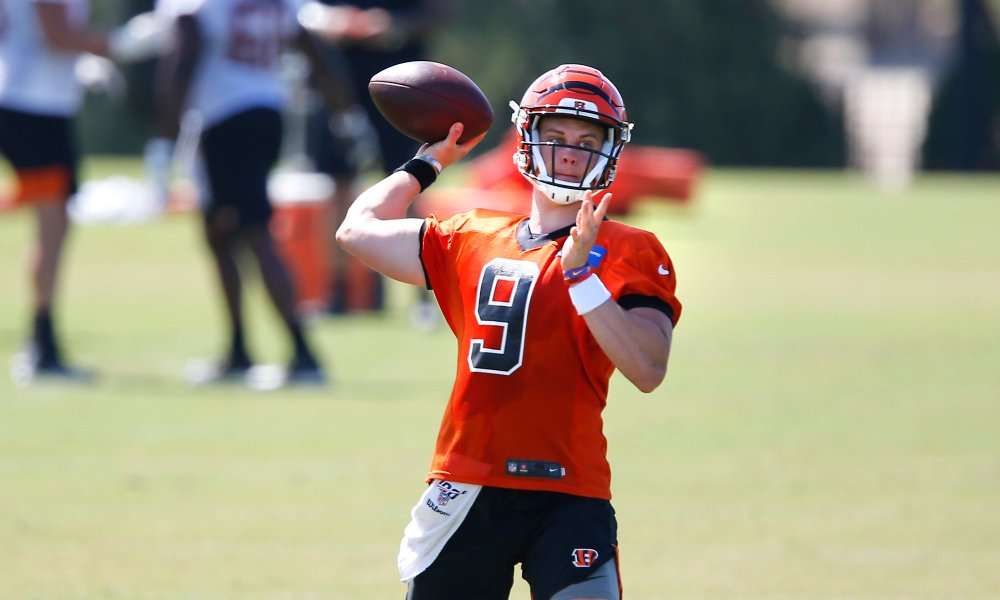 Well, it actually happened, we had an opening weekend- so let’s get our fantasy streamers in place for week 2! In this article, I’ll provide a list of Week 2 streamers that might just help you win your next matchup. Some could even provide long-term value on your roster.

Some quick qualifications; all players on this list will be rostered in less than 50 percent of ESPN fantasy leagues, using a full PPR format for flex players.

Burrow might not be available in deeper leagues, as he is currently rostered in 47.9 percent of ESPN leagues. But, if he is the 2020 first overall pick makes for a tremendous short and long-term pickup. Against a formidable Los Angeles Chargers’ secondary in Week 1, Burrow was able to complete 63.9 percent of his passes. Adding a rushing touchdown and 46 yards on the ground.

Most impressive of all was the “eye test”. Burrow didn’t look like a rookie during his first game, he looked like he had two or three years of experience under his belt.

You could obviously end up keeping Burrow for the long haul if you think he’s a natural. But either way, he’s a definite Week 2 streamer against a Cleveland Browns 29th ranked secondary that got torched by Baltimore on Sunday.

More of a risk, but Trubisky is currently only rostered in 2.7 percent of ESPN leagues. So, he’s probably available in yours. The former top prospect has gone through the ringer in his first three seasons, but this Summer he was able to ward off veteran Nick Foles.

Trubisky started off slow in Week 1, but ended up putting up big numbers in the second half of a road game against the Detroit Lions. He ultimately ended with 242 yards passing, three touchdowns. During his best season in 2018, Trubisky was a dual-threat fantasy quarterback that had the potential to put up 25-30 points on any given week. But a rough 2019 has kept fantasy managers away.

If you need a quarterback streamer this week, there may be no better option than Trubisky. Chicago are at home against a lousy New York Giants secondary that gave up three passing touchdowns to Ben Roethlisberger on Monday night.

Hines offers short and long-term value as a PPR specialist that led the Colts running back snap count in Week 1.

Part of this was due to a season-ending Achilles injury for starter Marlon Mack. But as it always is in football, one man’s misfortune is another man’s opportunity. Rookie Jonathan Taylor should dominate the early downs, but Indianapolis have already shown how they plan to use Hines in 2020- Phillip Rivers safety net in the flats.

Hines totaled eight receptions and two total touchdowns in that role against the Jacksonville Jaguars. Despite that he’s currently only rostered in 36.7 percent of ESPN leagues. The Colts are also set to face the Minnesota Vikings in Week 2, who allowed the 26th most points to running backs in Week 1.

We all know what AP is at this point in his career, a downhill bruiser that will churn out yards. The legendary running back did just that in Week 1 against the Chicago Bears. Finishing the game with 16 attempts for 93 yards (6.6 per carry) for a Detroit team that he just joined days before.

Malcolm Brown may not have the best streaming matchup against a sturdy Philadelphia Eagles’ defensive line. But, he is currently the starting running back on a team that likes to utilize the position. With two touchdowns and 110 total yards in Week 1, it’s shocking that Brown is only rostered in 7.9 percent of leagues right now. But that won’t be the case for long.

Rostered in 14.6 percent of leagues and could start if James Conner misses an extended period with injury. Faces a tough Week 2 matchup against the Denver Broncos which hurts his streaming value though.

Rostered in only 11.3 percent of leagues, the rookie rushed the ball 12 times in Week 1 at a 5.0 yards per carry clip. His Week 2 matchup against the Kansas City Chiefs isn’t great, but his long-term outlook is

The Colts are facing a Minnesota Vikings secondary that was exposed in Week 1, giving up over 300 yards and four touchdowns to wide receivers. Second-year Parris Campbell also had a clear role in the slot, catching six passes on nine targets for 71 yards. He’s rostered in 29.8 percent of leagues.

I liked Gage as a PPR sleeper in deeper leagues before the season began. However, I never imagined he would go nine for 114 on 12 targets in Week 1. The Falcons slot receiver has had a red hot connection with Matt Ryan ever since the team traded away Mohamed Sanu midway through 2019.

He’s only rostered in 4.0 percent of leagues and his matchup against a shallow Dallas Cowboys secondary could end up topping his Sunday performance.

More of a long-term add than a streamer, Davis is a former first-round pick who is playing on a contract year. He had over 100 receiving yards in Week 1. This week he faces off against the Jacksonville Jaguars this weekend (rostered in 4.4 percent of leagues).

Streaming option against the Packers who have poor corners outside of Jaire Alexander. Alexander doesn’t guard the slot, which Amendola mans. The experienced PPR target had five catches for 81 yards in Week 1, and was targeted seven times.

The number two tight end on the Eagles was a key contributor in 2019, finishing with 607 yards on 87 targets. In Week 1, with the defense focused on Zach Ertz, Goedert already posted 101 yards off nine targets (with a touchdown).

The Eagles receiving core is weak right now due to injury. Therefore, expect Goedert and Ertz to continue to clean up as Wentz primary passing weapons. He’s only rostered in 27.2 percent of leagues right now, and the Rams don’t have great safeties or linebackers that can cover him.

The Arizona Cardinals were one of the worst teams at guarding tight ends in 2019. That alone makes Logan Thomas a sneaky sleeper stream heading into Week 2. Adding to that though, he was targeted eight times by Dwayne Haskins Week 1. Currently, he is only rostered in 0.6 percent of leagues!

The Chiefs boom or bust defense has a very favorable matchup this week. The Chargers offense that could barely move the ball on the Bengals in Week 1. Chris Jones should help stop the run, which would force Tyrod Taylor to throw. Something that didn’t go too well last week.

The Rams are rostered in 16.8 percent of leagues and are up against a reeling Philadelphia Eagles offense that has been bludgeoned by injuries. The offensive line is in particularly bad shape, allowing eight sacks in Week 1. Aaron Donald will make a meal out of this scotch taped blocking unit… and Carson Wentz.

That’s it for our fantasy streamers for week 2 come back next week for more! Remember, you can always reach out to us on social media with any questions we are on Twitter, Facebook, or Instagram. And don’t forget to check out our weekly rankings!