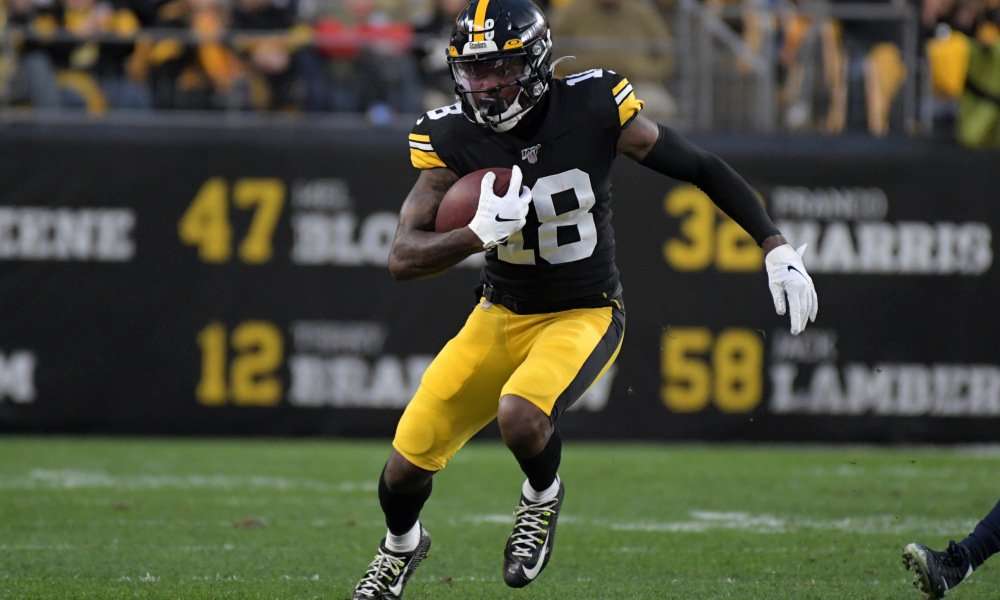 Week 2 was full of drama, mainly surrounding the treatment table, but that leads nicely into some week 3 dynasty buy and sell candidates. I’ve identified a few players with varying levels of value, so there is something for everyone.

The list of wide receivers to have received over a 30% target share through two weeks in the NFL is Adam Thielen and Diontae Johnson. That is it!

Diontae Johnson broke out for the best game of his short career in week 2 posting a stat line of 13 targets, 8 receptions for 92 yards and a TD. Coming into the season I was super high on Diontae, as I really thought he’d establish himself as the number 2 receiver in Pittsburgh. Through two weeks he’s established himself as the number 1 option.

That could well be helping the Steelers make up their minds and push Juju out the door in free agency at season’s end. The buying window for Johnson may well have already slammed closed. However, if you are willing to overpay on his current price you may be able to tempt the owner to sell before his price skyrockets.

A 1st is probably a slight overpay at the moment but I would feel very comfortable paying it. I’d start the negotiations around a 2nd and a 3rd and I don’t think you’d have to pay it but I’d be comfortable going as high as a 1st and a 3rd.

Preston Williams is coming off a torn ACL last year. Normally it takes two years to properly recover from an ACL injury. Yet 2 weeks into the season people are already getting concerned about Preston Williams and his lack of production.

I discussed this as a potential scenario earlier in the offseason and highlighted weeks 3 or 4 as the optimum point to buy if he did struggle early.

So far the targets have been there for Williams receiving 12 targets through 2 weeks; he’s just not been converting them with only 3 receptions to date.

The current price for Preston Williams is around a 2nd and if you’re looking for a receiver to help you next year and beyond you can certainly do a lot worse.

If you’re bold you could gamble that he continues to struggle the next couple of weeks. That should mean the price drops further and the Williams owner may panic to get what they can from the former Undrafted rookie.

Coming into the season I was really excited about Michael Gallup. He out targeted Amari Cooper in the majority of games down the stretch last year and outproduced him from a fantasy perspective. But you could get him several rounds later in both redraft and dynasty startups.

The drafting of stud receiver CeeDee Lamb dropped Gallups price as people saw him as the one likely to miss out after the Cowboys re-signed Cooper to a big-money deal. Through two weeks this fear has been a reality Gallup has not received more than 5 targets in a game. That is despite the Cowboys throwing at a top 3 rate of 44 pass attempts per game. Whilst Lamb has seen 15 and Cooper has seen 23.

However, I still believe in Gallups talent and think the target discrepancy will even out so therefore this provides a small buy-low window. His price is a future 1st. However, I think you can probably get him for less than this. Starting conversations around a 2021 2nd would be a great starting point.

Both of these are only for rebuilding teams. If you’re out of contention this year and turning your attention to 2021 you could do a lot worse than buying a proven stud at a discount.

A week ago Barkley would have cost you multiple 1st round picks. However, due to his ACL injury, you can probably buy him from a contending team for a win-now player.

Someone in the range of Dalvin Cook, Derrick Henry should be enough to convince the Barkley owner to part with the stud in order to keep their window for contention open.

Sutton is perhaps a little less certain, as we saw the emergence of KJ Hamler and Jeudy this week. With the rest of the season to go Sutton could drop down the pecking order in Denver if Jeudy proves to be the elite stud he could be.

However, Sutton is still worth enquiring about in my opinion. Sutton was the #19 WR overall in his 2nd season in the NFL. if you can acquire him for less than a future first that is an absolute slam dunk for a rebuilding team!

Insert comment about Steelers production line of WR’s. It’s a cliche but it’s true the steelers sure know how to pick day 2 receivers!

As I discussed earlier in relation to Diontae Johnson. I’m not convinced Juju is back in Pittsburgh in 2021. That would free up some playing time for Chase Claypool who has already flashed in his short NFL career.

Claypool is a fantastic athlete with 99th percentile speed and 92nd percentile burst. If he is going to step into an every-down role in an elite offense he could very easily be a top 24 receiver.

If you can acquire him for a 3rd that’s a good buy that will only increase in value. I think you may have to pay up to a 2nd in order to pry him away but it could very easily see a return on investment as soon as next year.

Two weeks ago if you’d have said Russell Gage would be a top 8 receiver in terms of target volume and be ahead of the likes of Julio Jones, Allen Robinson, Keenan Allen, and Adam Thielen you would have presumed both Calvin Ridley and Julio had been injured.

I like Gage as a player, but I don’t buy him continuing anywhere near this level of production going forward. I’d be shocked if Gage finishes the season as a top 40 WR despite his hot start. Chances are if you own Gage you didn’t pay much in order to own him. You either got him free in the offseason or added him off the waiver wire after week 1.

Now, if you can convince an owner in your league to part with a future 2nd round pick it’s hard to pass that up. Especially for a former 6th round pick who at the very best is the 4th option on his offense behind two absolute studs.

Darren Waller had a target share of 45.7% on Monday night versus the Saints receiving 16 targets whilst no other Raiders receiver saw more than 3. Waller is also currently seeing a target on 42.9% of his offensive snaps.

I really like Waller as a player and asset especially as he seems to be Derek Carr’s only trusted receiver at the moment but both of those numbers are not sustainable.

I am not advocating selling him at any cost and I would only sell for an overpay. However, if you can sell super high off the back of two incredible weeks then now may be the time to sell. Price-wise if I can get a 1st + I am happy selling especially if you’re not a contender.

So that’s it for the week 3 edition of dynasty buy and sell. Remember, you can find all of our dynasty articles here, and all of our work is posted across our social media channels. We are on Twitter, Facebook, or Instagram.