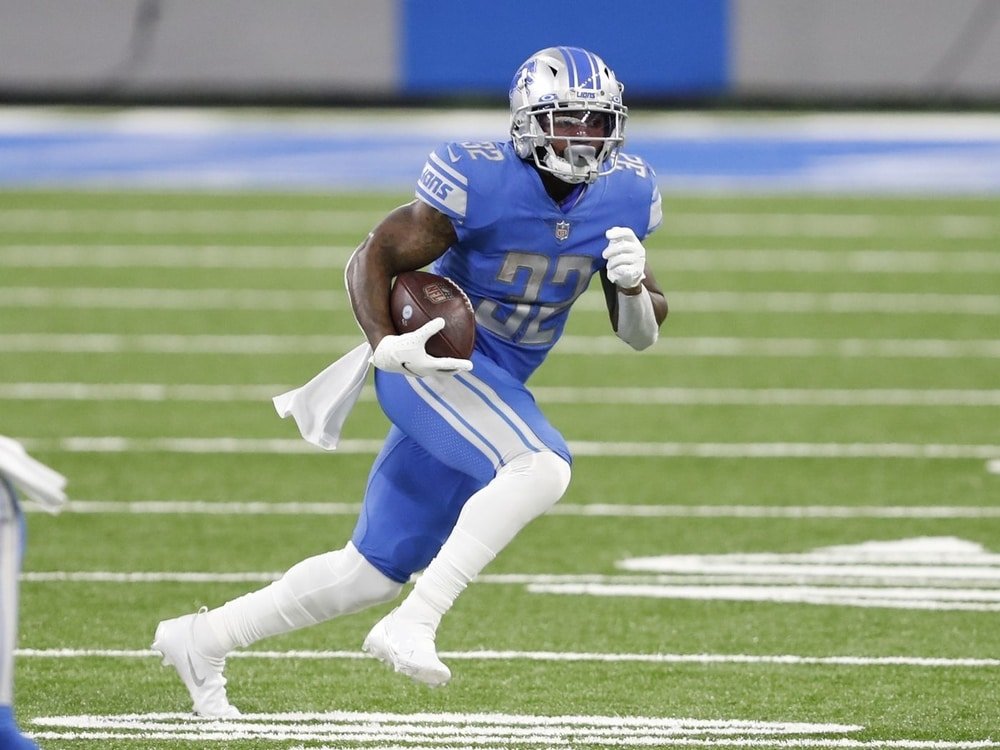 Welcome back to our weekly dynasty buy and sell column- here we are for week 8! Looking like a successful week last week after I told you to buy Juju Smith-Schuster and AJ Brown as well as Sell Kenyan Drake. Hopefully, you were able to get some deals done and already see the change in value.

Pre NFL draft Swift was pretty much everyone’s RB1 or RB2, he was my RB2 behind Jonathan Taylor. However, his landing spot dropped him down many peoples boards, and he settled as the RB4 in the offseason.

It was hard to argue with the logic he was heading to a crowded backfield, in a questionable offense combined with the great landing spots of the other rookies.

In week 6 he flashed big-time 27.3 points, he came back to earth a little this last week with 14.8 points. However, if you look at the season Swift has scored double-digit points every week except one. Swift passed Kerryon Johnson on the depth chart with ease and is currently splitting time with the immortal Adrian Peterson.

Despite this time split Swift has carved out a really nice role in his rookie season. He is seeing a 12.8% target share and averaging almost 10 touches per game. The fact he has produced so well with the limited workload hints at great things to come.

I don’t believe Swift will ever have a whole backfield to himself like Saquon Barkely, but Swift will eventually see a larger rush share. That might end up being in next year, but it should come. When he does he will start to produce like a true RB1.

Swift is creeping up towards my top 10 but is currently only the RB15 in Fantasypros consensus with a current price of a 1st and a 2nd. Swift is a great target for a team that is expecting to compete in 2021 as he’ll likely see an increase in workload next season and beyond.

Holding my hands up I still believe in Rashaad Penny and always have. He has shown some incredible fantasy potential when he is on the field healthy and given a workload.

In games where Penny has seen 10 or more carries, he has averaged 15.78 points per game. That has only occurred 5 times so is a pretty small sample size but certainly is encouraging.

Penny is currently still on the PUP list with no timetable for return, but Pete Caroll has hinted that he is beginning to near a return.

The Seahawks backfield is currently a bit of a mess with Carson, Hyde and Homer all battling injuries. So if Penny can return to health soon he could command a big chunk of the touches.

At the moment Penny is likely free. He may be sat on your waiver wire or you may have to pay late-round pick to acquire him. But when you can add a player in a high powered offence that has penny’s potential it’s tough to pass that up. This is a highly speculative buy and could come to nothing but most late-round picks are nothing more than that anyway.

I’ve resisted putting Gallup on this list for a few weeks. The reason being I’ve not been convinced his price has truly reached its floor. Now is that time.

The Cowboys are a train wreck this year. Entering the season they were widely considered a Superbowl contender. But that has unravelled, they boast the worst defence in the NFL, players openly criticising the head coach in the media and are now onto their 3rd string QB a rookie 7th round pick.

Gallup has been one of my biggest disappointments through 7 weeks. But I still believe in the talent and think this is probably the low point of his value.

A lot of owners won’t want to sell Gallup at his greatly reduced value, but some will have had enough of him sitting at the end of their bench. YOu might be able to tempt him away for a future 2nd. Alternatively, you could move on an ageing vet if you’re in a rebuild. I still believe in the talent and think you will see that when Dak returns in 2021 and beyond.

Coming out of college with one of the most complete rookie profiles Edwards could have been a day 1 receiver in the draft. However, a pre-combine broken foot that meant he missed the combine and lots of pre-draft workouts.

Edwards couldn’t have landed in a better spot either with no clear competition to be the outside receiver in the offense. There was a lot of buzz around Edwards around the rookie draft and he was a great late 2nd round pick.

With the majority of rookie receivers impressing in their short stints in the league Edwards is probably going forgotten by many owners due to his week 3 ankle sprain that has kept him out since.

We are approaching the time when Edwards should be returning from the injury and finally see the field. His main competition for targets and snaps is Nelson Agholor which says a lot about the state of the raiders receiving core.

If Edwards can get a decent run he should show the tantalizing potential that had people excited in the preseason. His current price is a future 2nd but it may be tough to get the owner to give up on Edwards so soon for the same price they paid 4 months ago.

So if you can pivot from a Zach Ertz, Curtis Samuel or James White the current owner may feel like they’re getting an upgrade to help them down the stretch.

This is a very specific sell. I have talked several times about selling at the optimum value in order to gain the largest return on the asset.

It was why I suggested selling Christian McCaffrey and Michael Thomas in the preseason as well as DK Metcalf two weeks ago. Now Alvin Kamara finds himself in the conversation as the #1 highest valued player in dynasty.

If you’re a contending team there is absolutely no way you should consider selling Kamara. However, if you’re a middle of the road team, or a rebuilder and you’ve had Kamara on your team that probably means the rest of your roster isn’t in great shape.

As I said this is a very specific sell but unless you’re a top tier contender now could be the best time to recoup max value. Look at Ezekiel Elliot, three weeks ago you were expecting an absolute haul similar to Kamara’s current price.

However, now you’d be lucky to get two firsts for Elliot. It really changed that fast. Kamara is a different type of player to Elliott but the price drop could be very real.

So that’s it for the Week 8 edition of dynasty buy and sell. Remember, you can find all of our dynasty articles here, and all of our work is posted across our social media channels. We are on Twitter, Facebook, or Instagram.