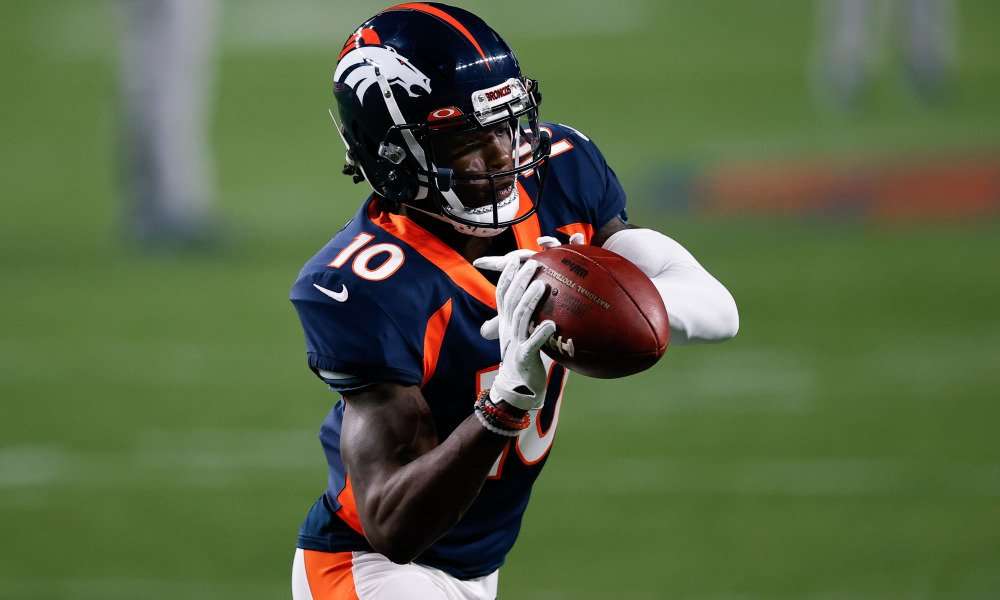 Week Three injury reports are more like novels, rather than an update on players. That’s because week two was simply horrendous for injuries across the league. It seemed like every five minutes someone was injured!

Always remember that injuries can really affect a players value for a week, so check in on our rankings regularly. Or, reach out to us on social media for a specific question about your lineup. You can find us on Twitter, Facebook, and Instagram.

The Giants have this week added Devante Freeman to compete with Dion Lewis and Wayne Gallman for touches. However, it is no longer a backfield I would be willing to invest too much in. Barkley struggled here so it’s tough to see a lesser player doing more.

With Sutton out for the season this opens the door further for rookie Jerry Jeudy to have a breakout, however we would need to see some improvement on his first twos games before I’d be happy to start him on my roster. Another rookie KJ Hamler may also benefit with increased targets however the biggest beneficiary for me on this offense will be Tight End Noah Fant who has already had a solid start to the season

Week Three Injury Reports: Out For This Week At Least

With reports that McCaffrey will miss 4-6 weeks, Mike Davis is expected to take the lead in this backfield. Davis logged 8 catches last week for 74 yards but was not effective in the running game. While we will not get McCaffrey numbers from Davis, if somehow he is still sitting on the waivers in your league, make sure you pick him up. As he may be helpful to your team while the star running back misses game time.

Jimmy G came out of the game versus the Jets this past weekend with an ankle injury and was replaced by Nick Mullens. Despite the matchup against the New York Giants, in single QB leagues, it was already hard to justify starting Garoppolo. Therefore, I would not be considering Mullens, particularly with the lack of weapons on offence. With several injuries, I would struggle to justify playing him in Superflex leagues too.

Campbell was set for a breakout season after turning in a great performance in week one. He will now miss game time with uncertainty over when he will return. TY Hilton will remain the prime receiver on the Colts offense, with rookie Michael Pittman hoping to see additional targets with Campbell missing time. Rookie running back Jonathan Taylor may also see his workload increase in the passing game.

The Eagles receiving core continues to be riddled with injuries. Reagor has had surgery on his thumb this week and expected to miss time. This should even more work for tight ends Zack Ertz and Dallas Goedert. Not forgetting running back Miles Sanders, who will dominate touches out of the backfield.

Another injury for the Giants offense in wide receiver Sterling Shepard. Darius Slayton will continue to see his targets deeper downfield, while receiver Golden Tate and TE Evan Engram may see an increase in targets. While Engram will likely not be on your waivers, Tate might. He could well be a decent pick up playing in an offence who have now lost their stud running back. That should mean the team are chasing in more games, forcing them to pass more often.

Quarterback Drew Lock left Sundays game against the Pittsburgh Steelers with a Shoulder Injury and was replaced by Jeff Driskel. Driskel didn’t do to bad throwing for 256 yards and 2 touchdowns and should be the starter in week 2. Going forward however, while Lock misses time, it is unsure who will be under centre after the Broncos signed former Jacksonville Jaguars quarterback Blake Bortles.

Another set of casualties for the 49ers with both Mostert and Coleman now missing this weekends game against the Giants. Jerrick McKinnon, a popular waiver wire add this week, is set to take over in the backfield, along with Jeffrey Wilson. The Giants have been awful against running backs so far this season, so this is a nice matchup.

A very peculiar injury for Taylor after he sustained a punctured lung when getting an injection from the team doctor for a rib issue he had. Stepping in is rookie Justin Herbert, who had a respectable NFL debut throwing for over 300 yards and a touchdown. He will be the teams starter again this week against the Carolina Panthers.

Crowder will miss another week which is not what the New York Jets want. Especially as Sam Darnold’s primary target on offense. It is hard to recommend anyone from this offense to play on your roster this week in a matchup against the Colts. Even Chris Herndon, who many expected to step up last week, posted a dud with 1 reception from 4 targets.

As mentioned earlier in the segment, the 49ers are having a lot of injury problems on both sides of the ball. That makes it hard to start any skill players from this offense outside of the running backs. Jordan Reed did put in a good performance last week in Kittle’s absence and may be looked upon again. While receiver Brandon Aiyuk will hope to improve on his debut performance against the Giants.

Rookie Zack Moss has failed to practice this week and has been ruled out of the week 3 game against the LA Rams. While he and fellow running back Devin Singletary had not stood out much this season to date. If Moss misses this weeks game, Singletary may get an opportunity to take the lead of this backfield.

AJ Brown has been ruled out and will miss his second consecutive week. Brown’s absence in week 2 benefitted tight end Jonnu Smith in particular, who tallied up 84 yards and 2 touchdowns, while receiver Corey Davis also found himself on the scoresheet. The Minnesota Vikings are next up for the Titans and they are weak on defense. I can see another win for the Titans ahead, along with good performances for Smith, Davis, and Adam Humphries in the absence of Brown.

Rookie Henry Ruggs was downgraded to Limited practice on Thursday has now been ruled out for the Raiders trip to New England. Outside of Josh Jacobs, Ruggs, and Darren Waller (mentioned below) it is hard to justify starting any other Raiders players for your fantasy teams. Many hoped for rookie Bryan Edwards to have a rookie season breakout and maybe one to watch, but not a starter this week.

Kirk has been ruled out this week with a groin injury missing the teams match up against the Lions. With DeAndre Hopkins the clear WR1 on the team along with Larry Fitzgerald, Andy Isabella may see a slight increase in targets with Kirk missing time.

Akers did not finish the game against the Eagles in week 2 due to a rib injury which turned out to be separated rib cartridge and will miss week 3. Fellow running back Malcolm Brown has now returned to full practice so he and Darrell Henderson will compete for touches this week against the Buffalo Bills. Henderson had a good showing in week 2 with 81 rushing yards and a touchdown and should see more touches.

Thomas will miss a second week due to the high ankle sprain picked up in week one. As mentioned on last week’s injury report, I fancied Tre’Quan Smith to fill Thomas’ shoes in his absence. Smith logged 5 catches from 7 targets for 86 yards, second in targets to Alvin Kamara who had 9. With the Saints playing Green Bay on Monday Night Football, I would expect Smith to see a similar target share in what may well turn into a high scoring shoot out. Look again for Jared Cook to receive targets in the redzone.

Adams suffered from hamstring issues this past week picked up during their game against the Lions. While head coach Matt LeFleur played down the injury, Adams has not practiced this week and is trending towards missing week 3. Expect receivers Allen Lazard and Marquez Valdes-Scantling to see a target increase along with running back Aaron Jones who stole the show against the Lions in week 2.

It looks like Kenny G is set to make his first performance of the season returning from a hamstring injury picked up prior to the Lions week 1 contest. Golladay has returned to practice this week and is trending up. This will help quarterback Matt Stafford who has had a slow start to the season for Fantasy Football, this could be a shoot-out against Arizona Cardinals so we may see a big performance from Kenny G if he is 100%.

Jones has been playing through a hamstring injury the first 2 weeks of the season and is yet to log a practice this week. If he features this week against the Chicago Bears he may be used more as a decoy to allow Calvin Ridley to continue his early season dominance. I also like Russell Gage in in this match up if Jones where to miss the game along with tight end Hayden Hurst.

Jeudy has been listed as questionable for the Broncos match up against the Tampa Bay Buccaneers, being added to the injury report on Friday evening. I have mentioned Jeudy earlier in this injury segment as a potential player to step up with Sutton being ruled out for the season. Hamlet, Fant, and possibly Tim Patrick could be relied upon this week.

Tight end Darren Waller went off on Monday Night against the Saints with 12 receptions from 16 targets, 103 yards and 1 touchdown. He will have been the cause of many wins or losses in your fantasy leagues. Waller unexpectedly did not practice on Thursday and the Raiders Injury Report advised this was due to a knee issue, quite vague. Not worth panicking at present but keep an eye on his status going into Sunday. Like Ruggs, the Raiders may be approaching with caution during their short week.

That wraps up the injury reports for week three. If there are any other players you are unsure about and have concerns for your fantasy roster, reach out. You can find us on Twitter, Facebook, and Instagram.